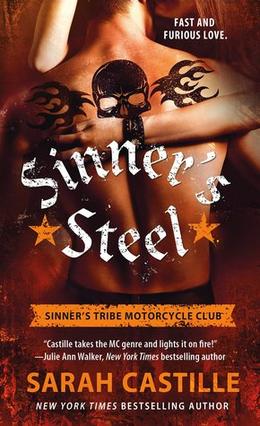 Trigger Warning: There are murders, torture and kidnappings in this book.

Sponsored links
This book is about a motorcycle club. With members who have killed, maimed and broken the law. They murder, they stab and torture...in a highly thought-out, premeditated way. Make no mistake, Sinner’s Steel is not a romanticised Sons of Anarchy rip-off. I don’t know if this makes the romance and sex aspect better or worse, because what could be worse than choosing to bring your child into a life where violence, male domination and anarchy rule? That is just what Evie does when she encounters Zane and let’s him back into her life - a life he never meant to leave. And you know what? She might not have been half wrong after all.

The Sinner’s Steel Motorcycle Club is a part of the 1% of motorcycle clubs who want to exist in their own realm and not follow the rules, norms and social mores of the rest of America’s MC’s. They wear blood-drop patches - representing the men they’ve killed - on their cuts (leather vests) without fear of reprisal or retribution from justice. Having bought or scared most lawmakers of the small towns they inhabit, they roam America’s heartland freely, carving out their turf separate from rival Motorcycle Clubs. Should anyone venture into enemy territory, they immediately jump into kill mode.

Rewind ten years earlier. Evie and Zane grew up as a part of a group of three best friends. At the end of high school they all end up going their separate ways, but not before Zane and Evie reveal their shy, yet powerful love for one another and come together to make love deep in the woods after their graduation party. Cue the tragedy and awful events of that night which force Zane into hiding and leaves Evie alone and struggling, while Jagger heads off to the Army to make something of himself.

It’s now the present day and Jagger and Zane have found themselves reunited as the President and Vice-President, respectively, of the Sinner’s Steel Motorcycle Club. For both men, it follows the pattern that the brotherhood of the club now serves to provide them with the camaraderie, family and finances they have been yearning for. That they know how to maneuver in the gang-like world of fighting and crime, where taking your beating is looked upon as an honorable way to do business, is a testament to the roughness and hardship each man grew up experiencing.

As for Evie, she has never had a constant, loving presence in her life. She has been a lonely, single mother for many years, shouldering the burden throughout a bad marriage to man who treated her poorly and ultimately became violent with her before she left. She also talks quite openly with her gal pal about needing some exciting sex in her life (all in front of her eight year old son). Evie is a young woman of 27, with a lot of negative life experience and a high sex drive and she decides that she is going to find an outlet for that drive by dating the head of Zane’s rival motorcycle gang. That is until Zane shows up and sparks and plentiful bullets and knives fly.

The tortured souls become locked in a dance for power, control, sex and ultimately love...an emotion both view as weakness leading to defeat. Throw in some kidnappings, knife mutilations, a stabbing and a few beatings and the two strong protagonists realize their love for each other in between some hot sex scenes that see a lot of rear entry and borderline bdsm-like behaviors. The raunchier the better as Zane and Evie discover that their adult tastes in sexual submission and domination dovetail.

Perhaps I hadn’t had enough perspective to get past the usually awesome and sometimes delightfully raunchy sex that seems to be a part and parcel of a good MC book. But this novel made me stop and think. Actually, it made me stop and question my usual ‘somewhere-in-the-middle’ class judgements and assumptions that I normally would have filed in the back of my mind when reading about a woman who would choose to be a part of a life where women are referred to as sweet-butts, lays, whores, old ladies or property.

I had never made the powerful connection between social class and the Motorcycle Clubs before reading this novel. Oh sure - most of the men who joined these clubs came from working class or lower home lives - decimated by abuse, addiction or neglect - that pattern is clear. Also the pattern of the women who fall in love with them quite often being familiar with the Clubs themselves because they had been either raised in a Club family or had been a part of the life before they met the hero of their stories. Ultimately, these rough and tumble courtships are the social equivalent of dinner on a yacht for the super-rich.

But what I hadn’t really paid attention to was the fact that for any woman dealing with forces that controlled her reality - whether it be poverty, crime, abuse etc., perhaps these books are in fact the knight-in-shining-armour kind. If life is hard, a daily struggle, who wouldn’t get wet at the thought of a big tough stud roaring in on his bike and making right all of the trash and garbage that is messing up your life? Who wouldn’t want all of those muscles in bed with them, ready to throw down if someone so much as breathed on a hair on your kid’s head?

I couldn’t help but wonder if Evie hadn’t made a decision that was right by choosing (after a considerable amount of thought) to live her life with Zane and her son in the Club. Right for her, right for any women who lived in an enclave where men dominated forcefully. Considering the life she came from - a criminal father and a neglectful, alcoholic mother - any man who could protect her, whether physically or emotionally would be viewed as a strong, loving partner. That he could also protect her son would be seen as a bonus in the world she inhabits.

And that is what got me thinking.

The assumption that it is mostly bored middle-class ladies who like to read about Motorcycle Clubs for the restrained violence and sexually exciting roughness of the men is probably somewhat true. (Though middle class ladies can and do suffer from violent partners, their social mores have more to do with routine and appearances than with wondering what to do about the dude who manhandles you at the local bar.) That most MC novels feature Clubs that are trying to go legit, Clubs that have gone legit, or members that have made lives in the outside world just proves this point of most MC novels intended audience who want ‘safe’ danger in their smut.

But while the middle class likes its whiff of violence, it does not like the kind of outright violence and aggression that Sarah Castille dishes up. This is where Sinner’s Steel might lose some of it’s middle class audience when it reads about prisoners being tortured on both sides of Cub fights. However, in its stead, Sinner’s Steel opens itself up to a broader range of readers - one’s that may just very well see Evie’s choices as the ultimate happy ending - a woman protected, loved and no longer needing to fear physical or financial harm coming to herself or her child.