All I Want (Animal Magnetism #7) by Jill Shalvis 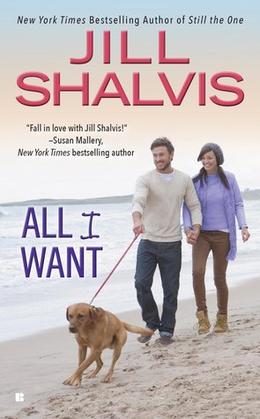 So if you’ve read any of reviews in the past, then you may know I’m kind of obsessed with Jill Shalvis. Not like in the way that I stalk her or anything (well, yet…), but she is a 100% one-click buy for me. All I Want is the most recent installment of her Animal Magnetism series, set in Sunshine, Idaho. Brief aside, I’ve always found the choice to set it in Idaho a fun one – Montana, California, Colorado and Oregon usually get all the stories west of the Mississippi, so I’m always charmed when an author ventures into other places.

Sponsored links
This one focuses on Zoe – a self-sufficient and stubborn pilot-for-hire who is quite used to doing everything for herself. A disaster with men, she’s currently reeling from some life changes in the form of her siblings finding their true loves. The book opens with Zoe getting ready for a blind date with a dentist and is being chastised by her sister for wearing a “grandma” dress on said date.

When the knock comes at the door, Zoe panics because the dude is way too attractive to be a dentist. Her sister dares her to open the door and kiss him – getting that nervousness out of the way immediately. Plucking up all her awkwardness and courage, she does just that.

Turns out, however, dude isn’t the dentist. Instead, it’s her brother’s friend who is coming to rent a room from her for a few months.

Or awesome, I suppose, depending on who you are.

For Zoe, it’s super awkward, while Parker (said hot guy) seems super into it all.

Parker is a special agent with the U.S. Fish and Wildlife division, responsible for tracking down and capturing big game poachers. His last assignment went a little awry and he’s on forced vacation while the agency sorts out the quasi-mess he made.

In the meantime, he’s one of those guys who should never be without a focused task to do and is left without one. So he creates a bunch of tasks – like fixing things around Zoe’s house and trying to deal with the failed operation on his own.

As their entire relationship started out with a kiss, the sexual chemistry is not surprising. They stop dancing around each other and get it on fairly quickly and the sexual activities are hot, fast and furious. The stuff they get up to in showers, for example, is something special.

Per usual with Shalvis stories, the two give into the physical urges and chemistry long before either one is willing to notice and engage with the emotional compatibility. This story in particular, has the two really avoiding intimacy for a long time – each of them could get gold medals in avoiding introspection. They both have perfectly valid and logical reasons for setting themselves up like that – Parker’s job is dangerous and frequently requires him to be off grid for long periods of time and Zoe got dicked around a bunch in the past and has all the guards up.

A lot of stories use this trope – the “I’ve been too hurt and so I will never love again” thing I usually refer to as the Scarlett O’Hara path. A good author can use this trope without making me want to bash the two characters up against the wall as I march them to a therapist’s office and tell them to get the fuck over themselves. Shalvis, of course, is a good author, and she walks the fine line between understandable and unbearable well.

The story is populated with other great characters beyond the main two – Zoe’s siblings are particular gems and there’s a great guest appearance by an adorable moppet with kittens for sale. The really interesting one, however, is Parker’s sister. An 18-yr-old with Down’s Syndrome, she is desperately trying to be an adult while her parents are constantly concerned with her ability to do so. This creates a tension between Parker and his parents and the dynamics of the family are well explored and well mined.

Overall, this is a great book. It does what it says on the tin – two people meet, fall in lust, fall in love and then find their happily ever after. They learn themselves and each other as they do so and the journey is a delightful one to be on. Highly recommended for anyone looking for a funny and fun romp, with a touch of cowboy attitude escapism.