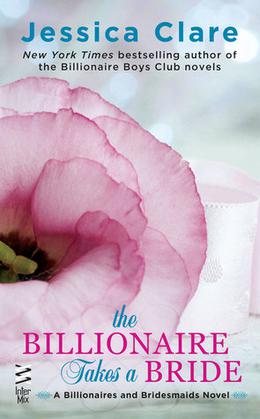 Jessica Clare is one of those authors I’ve had on my TBR for ages. She keeps getting recommended to me by folks I trust and I knew I’d love her, but y’all know how it is with TBR lists. They grow and grow and grow and pretty soon the stuff I really wanted to read three months ago is gathering dust at the bottom. So imagine my delight when this one sailed across my desk for review, thus thrusting it to the top of the TBR. And chickens, all of my friends (and some of you!) who told me to read Clare were not wrong ­ she is fabulous.

Sponsored links
The premise of this story ­ the third one in her Billionaires and Bridesmaids series ­ grabbed my attention immediately. It’s a treatment of the classic romance trope “marriage of convenience” but done in a really fun way. Sebastian Cabral’s family are Kardashian­esque and obsessed with their own fame. For himself, Seb wants absolutely nothing to do with the show and our story opens on him in an entertainment lawyer’s office, wrangling out a contract for the upcoming season. We learn that his mother will have a cancer scare ­ entirely for ratings ­ and he is to get back together with an ex ­ entirely for ratings. He balks at both, clearly.

We then meet Chelsea in her natural habitat ­ the roller derby rink. Chesty LaRude, as she is called, is strong, vivacious competitor who carries some serious baggage. After Chelsea and Seb meet at a friend’s pre­engagement party, they hit it off immediately. They realize that a pretend relationship between the two of them would suit each down to the ground and embark on a “Safety Date” situation. Then, due to the show and the aforementioned ex accosting Seb for screen time, the “Safety Date” turns into a quickie marriage of convenience in New Orleans.

Trigger warning wise, Chelsea is a rape survivor. About three years prior to the start of the story, she was drugged at a local bar, assaulted, raped, and left in a dumpster. Since then, she has an overwhelming fear of the dark, of small places, and of being alone. Her sex drive is gone, she no longer drinks alcohol, and puts nearly full dependence on her roommate Pia. Problem at the beginning of the story is that Pia gets a job transfer to Austin, leaving Chelsea to panic. Luckily, it’s not long after that that the marriage thing is put on the table, thus solving the roommate issue. It does not, however, solve the sex drive issue. It eventually does, don’t worry, but it takes a bit.

There’s research to support the idea that some rape survivors need to have controlled experiments in sexual control in order to regain possession of their libido again and Chelsea is one who falls into that category. Once she realizes that she does want to have all the dirty sex with Seb as possible, she’s frustrated that her body isn’t catching up to her brain. Some well placed handcuffs and a foray into dominance starts the process of a solution to that issue, but what I really loved about this book was that it was not a one­time thing.

Trauma survivors and those who love them know that sometimes it’s one step towards healing and a whole lots of steps away from it, in a cycle of growth that sometimes seems stagnant. They need patience and care and a lack of judgement in order to embrace the healing and not regress. That space is what Seb provides for Chelsea ­ physically, emotionally, and sexually.

I’d class Seb as a beta hero. He’s not all brawny and bossy as a default, but certainly is when he needs to be. He’s completely tuned to Chelsea almost immediately and puts her, her healing, and her psyche above himself. I’ve been on a trail of alphas lately and Seb was such a breath of fresh air. I know guys like him. Not billionaire reality TV stars who draw in their spare time, but dudes who find their strength and their centers in loving others. I loved reading about how Seb loved Chelsea and that love, in turn, helped her find herself again.

Overall, I’d recommend this book for anyone who loves marriages of convenience, badass women, sensitive men, reality TV, sassy best friends (Gretchen is a hoot and a hollar, y’all), and happily ever afters.