Revealed to Him (Kerr Chronicles #3) by Jen Frederick 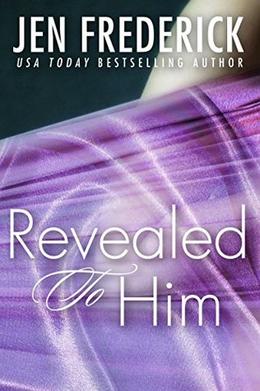 Someone is torturing Natalie - sending her hate mail, dead animals and delving into her deepest fears. She has become a recluse, paralysed by fear to the extent that she hasn’t been able to leave her apartment for years. She stays home, writing her best-sellers and limiting her contact with the outside world to mitigate her anxiety and reactions to the unknown.

Sponsored links
Jake, a former military man from the Afghanistan conflict, is on her case. A security expert of the highest caliber, this millionaire double amputee doesn't let his medical situation hinder his performance as he keeps his six foot three, 260 pound frame in top fighting form. So when the fireworks start to fly on text before they even set eyes on each other, you know this is a romance that has love written all over it.

I’m laughing as I write this, because that “jacket description” (which is my version of the plot summary) seems so outlandish and wild to the absolute extreme, that it must be a joke, right? Something one romance writer whips off as an undoable writing challenge to a fellow writer, in a kind of “write-down showdown” one would expect in a rapping challenge.

Only, it’s not a joke, and this unlikely plot, with it’s unlikely hero and unlikely heroine, turns out to be a really amazingly intense love story that hits the mark in a very satisfying way. Itr goes a little something like this:

Natalie is a successful 25 year old writer who happens to excel in video game and science fiction writing - areas where many of the male fans believe the genres should only be traversed by men and should forever remain male dominated. Trolled online and subject to some very misogynistic criticism and sexual threats, including gang rapes, Natalie is attacked in the New York subway and so begins her journey into agoraphobia, trapped in the safety of her condo, a prisoner to her fears of the unknown and of her need to feel safe.

Her millionaire football star cousin Oliver hires Jake, an ex-military man who is an expert in personal safety and security to investigate and find the culprit(s), basically picking up where the police have failed. Oliver is concerned because the threats against Natalie have started up again and have obliterated Natalie’s gains in leaving her apartment. Natalie, we come to find out, is paralysed by even trying to open her front door and has only a handful of trusted friends whom she interacts with. Her world is growing smaller and smaller as the threats and messages continue.

Jake, is a level headed, emotionally in-touch man of 35 who has come to terms with his loss of his left hand and his left leg (below the knee) to an IED during his tour of duty in Afghanistan. He is no hero and likens himself to an ordinary soldier - a Ranger - who did his duty and has paid his price in terms of his body and his mind for his service to his country. Jack makes no bones about having had a good deal of mental and physical therapy to adjust to his experiences and a good deal of interesting information is given about his prosthetics work and how they affect his day to day living.

That Jake happens to have money - and plenty of it, is explained to us as a result of his familial inheritance. Either way, rich heros and heroines simply make for more possible plot lines - like Jake having a couple of rooms in his home recreated into copies of Natalie’s apartment rooms. Money makes so many things possible, and Jake’s money helps inform us further about the advancements in prosthetics that he is able to access. Money is indeed a privilege as Jake acknowledges, and this book proves that, through the very unconventional subject matter dealt with in this book.

Rarely, if ever, have I read a romance that dealt with the two very heavy hitting subjects that mental illness and amputee's represent. The way Natalie’s agoraphobia is dealt with is refreshing. Finally, someone who is a ‘real’ person, someone who has strengths, weaknesses as well as a mental illness. Natalie has a sense of humour, hopes, dreams and a big, huge boner for Jake. The two of them connect on a very fundamental level over text. Trust and understanding are interwoven with their early attraction with one another.

Natalie is turned on by Jake’s maturity and acceptance of her as a person, instead of the freak-show some people treat her as (and that she dismisses herself as in times of darkness). Jake likes that she is smart and funny and doesn’t see him as less than a man - he also likes that he can offer her protection and security. Their sexual attraction once they meet in the flesh is intense and electric, and Jake’s heart is sealed as her realizes she isn’t turned off or turned on by his prosthetics and stumps (for those of you who don’t know, there is a whole subset of fetishists who get off on stumps and amputations).

The sex is fantastic. Jake teases, fucks and loves Natalie with gusto. He uses sex to distract, excite and worship her, and in return, we find out that seemingly fragile Natalie can take a pounding with the best of them. In fact, she loves the pounding and their sex is really good sex - period. Not good amputee/agoraphobic sex, but good sex in the back of a car, in an elevator, on the floor, with toys, on the bed, in the shower… The sex in this book is a ten out of ten for originality, intensity and hotness. The love that each genuinely feels for the other is beautifully expressed through a number of scenes as each comes to understand the extent that the other has affected their lives and happiness.

Overall this is a really enjoyable book. The ending is somewhat campy, but really, that barely affects the story. Believe me - there is no cookie cutter ending to either of their situations when the culprit(s) are found and the mystery ended. Natalie still faces serious challenges and Jake will always have his prosthetics to deal with. In the end, they are both stronger and more capable for having found a solid trust and love in each other. A very satisfying read. This book rates a four out of five stars.