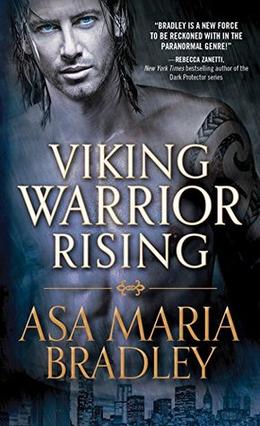 Chickens, my tolerance for paranormal romance normally hovers around a 2 out of 5. I hate vampires, can’t stand werewolves, do not understand the appeal of shapeshifters. I’m a social worker, remember, and for me humans are fascinating and complicated enough without adding immortality, fur or the like to my romances. I love superhero movies and video games, but paranormal romance has never gotten my engines revving, per se.

Sponsored links
Viking Warrior Rising however, garnished a 3.5 out of 5. How, do you ask? By making me believe that this could be possibly real. The way Bradley constructed this work made me completely believe that this layer to reality is happening around me, unbeknownst to most of us. That, darlings, is talent and so the rating went up.

The premise of this book is a bit complicated, so buckle in a bit: Naya is a genetically modified human who is desperate to permanently escape those who modified her, but not before she gets answers as to why they did it. For about ten years, she was held captive and experimented upon, turning her into a super soldier for purposes unknown. She escaped about a year ago to become an in­demand cyber security expert, working for folks who have cash to burn and value privacy over all else.

Leif is a mythical Norse warrior, subject only to Odin and Freya, who is embattled in fighting Loki (sadly, apparently not the Tom Hiddleston version) and his minions as they try to take over the world. Leif died in the 11th century, spent time in Asgard and has now been returned to earth as a Viking King, complete with loyal subjects.

The two are fated to be together, so the process of falling in love is a little bit different than normal. Upon meeting Naya, Leif’s warrior spirit (the berzerker) can only be held under control by Naya’s presence in Leif’s life. If you read the description of Naya above, you can imagine that she’s not all that amenable to intimacy. Sex is grand and she certainly quickly starts enjoying the sex side of being in a relationship with an immortal, but this whole soul mate business is not really to her liking. On that front, most of the book is spent with the two of them dancing around each other, coming to grips with the permanency and lack of choice in their new arrangement.

But that’s okay that it takes them awhile to sort themselves, because christ on a cracker, y’all, they have some other shit to juggle. Loki’s favored minions are wolverines, genetically engineered to destroy Leif and his team. Naya’s past and present are a constant drama. The world’s future is in their hands and they’re a little short staffed. They prevail, of course, at least for now ­ but the happily ever after is nearly as much about the battle as it is about the two of them.

Not only do I not usually read paranormal, I’m also not a huge fan of romantic suspense. However, as with the paranormal elements, the suspense elements won me over a bit too. These two sub­genres are still not for me (bring on the small towns and sports romances, please and thank you), but even I can tell this book fires on all cylinders. The world building is immense and I would absolutely recommend this for anyone who is either a paranormal fan or a suspense one. I enjoyed this far more than I thought I would ­ the payoff at the end was worth it by far, as well as leaving the door open for further developments in this world ­ and I’m sure anyone for whom this ticks their boxes, this is a home run.

So, summary: liked it waaaaaaay more than I thought I would, which is saying something significant, and would recommend to anyone remotely interested in Norse mythology, government conspiracies, insta­love, fate, and the usual Alpha Male trope of not having a bloody clue how to effectively communicate with other creatures. Bless Leif, he tries and it’s not like Naya is much better. Anywhoozles, I think this one is worth your time and I’m potentially going to pick up the next book in the series which I certainly never thought I would.