Mine (Club Sin #7) by Stacey Kennedy 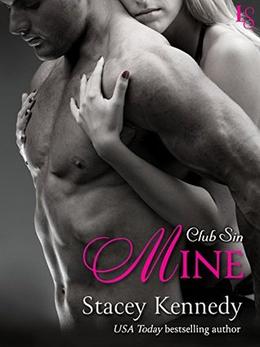 I have started this review about seven times and am still unsure how to start this. So let me do this:

In terms of D/s stories, I think this is a decent one. The guy seems like a touch on the douche side, but he also clearly devotes himself to his submissive, so that’s a win. It’s hampered for me by the novella format (my digital file has this clock in at 103 pages where most full­lengths hit around 275) because the relationship outside of the sex scenes seemed ridiculous. Additionally, I believe my enjoyment was hampered by being new to this series. I have a feeling that Club Sin reads like an 8­part novel, of which this is the last. So, reading this would be like watching the last 20 minutes of Harry Potter and the Deathly Hallows and thinking, what is that dude doing in a train station? What is happening? Nice speech, beardy dude, but what’s the deal with the guy with no nose? You get my point.

Committed D/s relationships are a tricky thing to write about, I feel. They’re so personal and so distinct to each couple that to try to write it down in a way that doesn’t seem hokey or even abusive to people on the outside can be a challenge. And one I’m not sure this book fully overcomes. I kept raising my eyebrows and saying “really? REALLY? You literally cannot function without him for a week? Catch yourself on, woman, deep breaths, take a bubble bath and grab your vibrator.” That, to me, is not romance or relationship, it’s codependence and it stresses me out to read about. However, I always use this caveat with series I’m coming late to: the groundwork was probably done long before I showed up and so I want to give that the benefit of the doubt.

Overall, like I said above, if this ticks your boxes I think you’ll enjoy it. It’s not one to start the subgenre on, but it’s enjoyable for those acquainted already.