Some Like it Scot (Scandalous Highlanders #4) by Suzanne Enoch 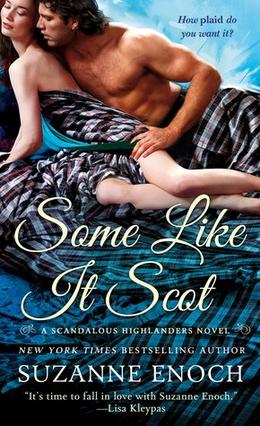 Shooting at the man who drives you wild might not seem like the best strategy for attracting a mate, but when you’re on the run from not one but two scorned fiancees, taking risks is just how you roll. Welcome to Some Like It Scot, a lovely and sweet romance book written by Suzanne Enoch for those of us with a penchant for large, gruff, romantic men with chapped knees and sexy kilts.

Sponsored links
Catriona McColl is the delightfully foul-mouthed, take-no-shit Scottish lass who tries to shoot the balls off of Munro ‘Bear’ MacLawry when he discovers the spot where she and her on-the-run half-sister have holed up. Catriona and the woefully unprepared (and ill-equipped for living off the land) Elizabeth are hoping to secretly spend the winter on a corner of his family's ancestral lands. Catriona figures that if they can lose themselves in the Scottish highlands, Elizabeth's scorned elderly and abusive fiance will write her off as a loss and leave her be.

In between shots, the suspicious and decidedly attracted Catriona discovers that the six-foot-eight giant of a man really just wants to help her and her sister from freezing to death in the ruins of Haldane Castle. The reputedly haunted wreck where they have set up camp is falling apart at the seams. Bear brings food, blankets, coats and his brawn every chance he gets just so he can be near this fiery redhead he nicknames ‘Wildcat’.

What takes Catriona much longer to cotton onto, is Bear’s immediate attraction to her, because at the core of this self-sufficient, rough and tough-as-nails wildcat, is a shy, self-conscious young woman. It takes a few chapters to get to the heart of Catriona’s self-esteem story. We are given a number of clues as to her eccentricities - she wears a complete outfit of men’s clothing - shirt, coat, trousers and boots. She can shoot like a champ with a musket and she can build a fire and can dress a deer in the field that she has taken down at considerable distance with a single shot.

Catriona’s lack of social graces and social awareness - for high-born Scottish woman of twenty-five, are quite glaring in comparison to her English raised half-sister Elizabeth. Catriona comes across as a modern-day feminist at first glance - choosing her own clothing, making her own decisions, generally acting independent of and sometimes in defiance of the men in her world. But as we get deeper into the book and into the mystery of Catriona, we find that there is actually a much different reason for her seeming to snub her nose at the social expectations of her era.

Bear is almost the female equivalent of Catriona. A misfit who towers above everyone in his entire life. A young man judged by his brawn and his beauty and not for the brains in his head. Granted, Bear would be the first to admit that he took advantage of that situation to avoid a good deal of responsibility and instead took advantage of a good deal of female attention. Bear, we find out, was something of a happy-go-lucky man whore before meeting Catriona.

Once Bear’s family discover the presence of someone living at Haldane Castle, Elizabeth blows cover and takes the offer of a warm residence and the protection of the MacLawry’s as she takes up residence in their home. Catriona stays hidden, leaving Bear opportunities to return and steal kisses and so much more from the lovely headstrong Scottish miss. I suppose that is one of the challenges of writing an historical romance - when the social rules don’t allow for unmarried women and men to be left alone together, I always admire a creative turn that allows for a little ‘alone time’ between lusty couples.

Bear and Catriona make good use of their time alone. The giant with midnight black hair and eyes as green as spring, gently and comically begins to seduce his virgin Wildcat. The chemistry is right and hot and smoldering. But what really brings the inevitable coupling of these two tempestuous characters to a higher level is the dialogue Bear has in his mind as he claims kiss after kiss and so much more from Catriona. Not quite aware of the meaning of the changes coming over him, he recognizes an intense need to be around her, in her, with her. He wants to protect her, encourage her and claim her. He loves her in all ways it is possible for a man to love a woman.

Bear does a great deal of growing up as he realizes the serious predicament Catriona has found herself in when he discovers that she too has fled an unwanted fiancee. However, Catriona’s problems and the ramifications of her flight from them are much more far-reaching than the consequences of her half-sister's flight. This is the point where all of the book’s loose ends become twined together to form the cohesive thread of the central narrative - a political, romantic and sociological pickle of a problem to sort out, with love forming the deciding route going forward.

By the time Bear’s brother’s (including his eldest brother - his Clan leader) have figured out the who’s who between Catriona and Elizabeth’s spurned suitors and the relationship that has grown between Bear and Catriona, things have gotten tense with the involvement of two other powerful and possibly troublesome (think all out warring) Clans. To make the problem go away, Bear’s brothers twice try to bribe Catriona to take large amounts of money and leave without Bear. Both times she denies them and tells Bear that she won’t leave him. Bear, as well decides that his love for Catriona means he possesses the strength to leave his family if it will avoid a war with her Clan.

Ultimately, Some Like It Scot is a story of two unlikely misfits who find full acceptance and love with each other - even at the cost of risking their relationships with their families. Catriona and Bear have experienced familial love and support in two vastly different ways, yet each finds a way to bring out the best in the other and they experience a deep love and connection of belonging to one another. The secrets and choices of Catriona’s family make for some interesting plot twists, and anyone who has ever doubted their adequacy as an attractive female (which would be most of us at one time or another in our lives) will be able to identify with Cat, and come to love Bear all the more for his literally ham-handed way of defending and protecting the woman he loves. If you love the intricacies of diplomacy and political posturing, you’ll also like the ending of the story as well.