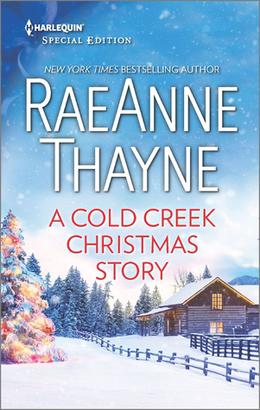 In the words of Lady Gaga, this was a Bad Romance. Bare bones, basic and disconnected are three words that could describe the heat between the two people involved in this Christmastime story.

Sponsored links
A Cold Creek Christmas is one of those stories where the falling in love happens after only one kiss, and the romance consists of snatches of thoughts and the inner longings of each of the protagonists - but mostly our heroine Celeste. For some people, this is the sweet and lovely process of the kind of romance where the sex ends at the closed door of the bedroom - and the rest is left up to the imagination of the reader. And a la Seinfeld, I say, “Not that there is anything wrong with that!”!

The book really is about Celeste’s story - her need to find comfort and stability and the constant intrusions of life that seem to get in the way of this goal. Celeste is the 28 year old suspected virgin (no info is given that would lead us to think otherwise) librarian who longs to meet someone stable and giving. One of those intrusions just happens to be in the hunky form of wealthy Flynn, the now-adult grandson of her elderly neighbour who has recently died. Flynn is back in town with his young daughter in order to clean out his grandmother’s house and put it on the market.

As is, that would make for a pretty interesting book. What is wrong with this story is the hokey, super far-fetched backstories of each of the characters and the insta-love they find while helping to heal a traumatized child. Let me fill you in, and pay close attention to your reaction:

Celeste has just hit the big time with her children’s book about a reindeer and is entertaining a Hollywood movie offer, and she also happens to be the survivor of a month long, childhood kidnapping by a drug kingpin-psychopath in the jungles of Columbia, where her parents were missionaries. Her father was shot trying to save her, leaving her with a legacy of skittishness and survivor’s guilt. Flynn, by contrast, is the son of a famous movie star and is also the ex-husband of a recently killed hollywood A-list movie star, whose murder-suicide at the hands of a new boyfriend has left their young daughter with gunshot wounds to her leg and arm that she is slowly recovering from.

Umm….Can you sort of see what I mean about it being just a tad too much?

When I read those details, I took a deep breath, laughed with disbelief, shook my head and kept reading, because what else can you do when given background like that? Look, I get that having details that remove one from their own lives is a way for the author to transport the reader into a world of fantasy, but these scenarios really do take the cake. Oh yeah... AND, I totally forgot to mention that Celeste’s family runs a Christmas themed farm complete with reindeer, sleigh-rides, a mini-Christmas-village and a great hall where Santa plays host.

Seriously - it just never seems to end with this book.

I’m a little surprised that this is a Harlequin Romance production. Harlequin’s have come to represent a certain level of plausibility in respect to storylines and depth of character development, or maybe I’m still stuck in the 90’s. I get that with their original imprint, the sex is going to be more of a puff of smoke than a forest fire and I also get that for a 200+ page book that includes a sizable “coming soon” excerpt at the end of the book, the story is going to be pretty quick and fast. But... I do expect a better quality of romantic connection between the man and the woman of the story.

For most of the book I couldn’t really figure out if Flynn was actually attracted to Celeste - attracted as in sexually and/or romantically. I know for sure his daughter thought the moon shone out of Celeste’s eyes, but Flynn only really seemed interested in Celeste because his daughter responded so well to her and actually seemed to be coming out of her apres-attack funk. Flynn and Celeste have no real fireworks happening, no real banter, except for the mild hard-on she gets looking at him and remembering the gorgeous teenager she had a crush on as a child.

Olivia, the young girl/daughter who is recovering from the murderous attack that killed her mother, seems to be the catalyst that actually moves their romance forward, throwing them together into dinner situations and sleigh rides. Celeste’s family does the rest, playing matchmaker for her by inviting Flynn and his daughter to dinner. Celeste seems to have no idea how to let Flynn know she is attracted to him, and Flynn seems almost embarrassed that he has even noticed she has breasts.

It just kind of boggles the mind that these two adults can even be on the road to romance.

Please know that all the way through reading this book I kept reminded myself that there are different types of romance novels. Some are raunchy with lots of sex for people who find sex the connective glue that drives a relationship to it’s ultimate conclusion of love. Some are the sweet and gentle interactions of two people who circle each other’s planets until they feel comfortable in each other’s orbit and then give the sex thing a try. I have read many a romance book where the most interaction was a chaste kiss or the holding of hands - novels that completely melted me at the beauty and depth of the love felt between the two protagonists. However, this book left me unconvinced and really, it left me unmoved.

The most emotion I felt while reading this book was when reading about the unrequited feelings of love Celeste had when Flynn angrily rejects her near the end of the book. The pain and misery she feels really hits the mark of a real character that a reader can relate to. The rest of the book finishes with a cookie cutter ending - a running away, a chase, and a reunification, with the realization of a love so deep it will leave you scratching your head and asking “Umm..where did THAT come from?”

The town of Cold Creek certainly has it’s share of love stories - the couples are revisited throughout the book, and you can see that the franchise is well fleshed out, but it would seem that Flynn and Celeste’s story hasn’t been developed as well as it could have been. While there are lovely scenes of the couple enjoying time with Flynn’s daughter, their time alone seems to be rather awkward and disjointed, which really is too bad.

This is a book for fans of the Cold Creek series. If you haven’t already started the series and this would be your entree into that world, I would say to just consider what it is you are looking to get out of your romance reading time and to be aware of what you’re not going to be in for with A Cold Creek Christmas Story.