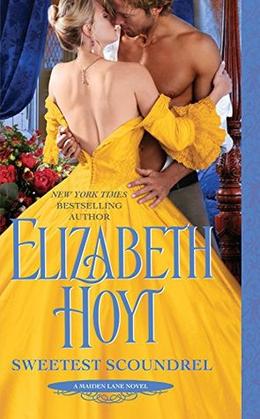 Imagine meeting a sexy and attractive man for the first time. Sweet warm feelings assail you, maybe electric, sexual sparks will be ignited within. Now, imagine meeting him as he is exiting the bed of another woman, and still getting all hot and bothered over him anyways! This is hardly the opening encounter we expect of any romance novel. Even though the circumstances of the initial encounter between Miss. Eve Dinwoody and Mr. Asa Makepeace don’t quite meet our idealistic expectations, shockingly, Eve seems to harbour no disgust or revulsion at the sight that greets her upon the fateful opening of his bedchamber door.

Sponsored links
Rather than wonder about his proclivities, Eve is somewhat transfixed to be witnessing this scene of en flagrante-intimacy that she herself has never had opportunity to experience. This all seems rather odd for the reader because my first thought was “Oh no! I hope this is some secondary character - because what a baaaaaad way to meet the hero’. But, it turns out, that the hedonistic man in the rumpled white smalls really IS our hero, as much as I wished it weren’t so.

At first I really disliked Asa Makepeace. He sounded like some kind of mythical monkey-man hybrid. Wider at the shoulder than he was tall, super virile, hairy and highly charismatic. The fact that we meet him getting out of the bed of an Italian-ish opera singer - well! As corny as it may seem, most of us like our heroes and heroines untouched by any sexual encounters of their past or present (unless they make for good jealousy fodder later in the plot).

Eve and Asa are thrown together as Eve acts as the ‘man of business’ for her brother - an extremely wealthy and extremely eccentric aristocrat who is financing Asa’s business project. Eve, so shy and so sheltered, yet with a backbone of steel when it comes to protecting her half-brother’s money, is therefore put into direct opposition of Asa as she tries to make sense of his expenditures on the rebuilding of his burnt down Gardens of folly and delight.

We see Eve as a cultured, intelligent woman in her late twenties, who seems to be existing rather than living life. Some nameless event has occurred in her past that renders her paralysed with fear when touched by a man or approached by a dog. Eve possesses undying loyalty for her half-brother as we find out that he had saved her from this indescribable horror (and it really is that bad when you learn what it is). For that, and for providing her with a 24/7 bodyguard, Eve is forever his champion.

As Asa sets up his Garden - a delight of theatre, music, beautiful plantings and pathways - designed for the upper classes of London to enjoy, we get a peek behind the curtains of the lives of some of the lower class people of the times - the dancers, the singers - the people who inhabit the classes most of us presently reside in. Just being able to be transported to another time is escapism enough for me. It doesn’t have to be all carriages and balls and dressmakers to get a few hours of enjoyment out of a book.

That our heroine is allowed to find everlasting love with a man from the lower classes is explained by the fact that Eve is the bastard daughter of an aristocrat, her half brother now holding the title and bankrolling her lifestyle. Asa himself comes from the edge of poverty, having been disowned by his father and banished from the family for working in such a low profession as an entertainment manager.

That Eve is described as being of average looks with a flat chest, a tall and boyish figure with a rather large nose, is something of a refreshing occurrence - finally a real woman who isn’t a dazzling beauty, but one who comes alight as she finds an amazing passionate connection with Asa the monkey-man. Asa’s lust for life and everything else in it - especially sex - seems to grab Eve by her short and curlies and draws her out of herself and into the grip of discovery that seems to be fuelled in no small part by the growing attentions of Asa.

Elizabeth Hoyt really has a talent for taking elements that are so disparate and weaving them together to make a love story that her readers can really get behind. Granted, not all of us have experienced being a virgin frozen speechless with fear at the touch of a man, but she very easily helps us get into the head of Eve, our delightfully rich in character and moxy heroine. We are definitely along for the ride each and every step of the way.

There are a couple of side plots that are hinted at but never really fully developed, probably because they will be featured in other books. The mystery of Eve’s absent and eccentric half brother and the strange housekeeper of his manor house - who runs it like clockwork while searching for some lost letters - has some connection to his latest blackmail scheme. There is also a ladies group who seems to be working behind the scenes trying to catch Eve’s half brother at his shenanigans, and yet they curiously allow Eve to join their ranks.

This really is a nice, heartfelt book that by the end had me cheering for and loving the monkey-man. I was rooting for Asa to help Eve overcome her reticience and seek his touch, and I was, gladly, not disappointed.