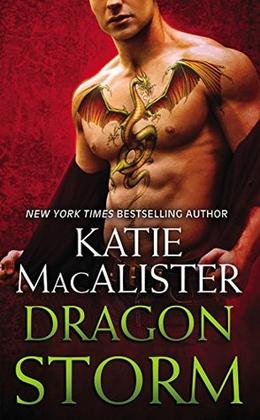 Imagine having sex with Data from Star Trek, except that he is a magical dragon that can take the form of a human - a human with robotic-like dirty talk and a penchant for sex toys - including a blow-up sheep wearing fishnets. I mean, how unsexy can you get, even if the man in question is described as a hot and sexy, muscular male? The robotic monotone that seems to be inferred from his speech patterns would just take the wind out of my sails, and really does take the steam out of the sex in this book.

Sponsored links
Dragon Storm by Katie MacAllister is a work that is obviously a part of a series, which can be a good thing if you have read some of her other books, because you would then have more of an idea about all of the magical boundaries and rules that govern her made up world. Taken on it’s own, Dragon Storm is unfortunately like many other fantasy books, in that not enough attention is given to explaining the relevant background information that would help the reader place the action into some sort of understandable context.

Some of you would argue that I should just shut up and enjoy the book for what it is: a bit of piff to while away an hour and have a little titillating fun, but I have to disagree. If I can’t make sense of the action, then the whole experience is a bust for me. Ms. MAcAllister does attempt to explain many of the movements through and between the nether worlds, but there does seem to be a lot of characters that just kind of pop up in the action with little or no introduction, leaving the reader to guess at their importance.

So, start paying attention to see if you can make better sense of things than I could.

Constantine is a wyvern, or rather, WAS a wyvern or leader of a type of dragon sect. He is the grandson of the first dragon - a very powerful person indeed. Constantine can take a corporeal form (human physical form) but this takes a great amount of energy, the kind of which he seems to amass while relaxing in his dragon form. Oh yeah, and he is also already dead, which means that he cannot die again but can be killed but he won’t be forever dead (yeah I didn’t get it either, but just go with it) and this makes or doesn’t make him able to be seen by certain other beings who are magical. Being seen is important because that is how he notices his soon to be true love.

Now, this magical “otherworld’ that Constantine hails fromexists in parallel to our human physical reality, although the magical people/beasts are able to traverse both worlds through portals, spells etc. (but only certain people/beasts through certain portholes) and the regular people are mostly unaware of the existence of Demons, Charmers and Dragons. These magical and fantastical beings are just some of the people/creatures/beasts we encounter as Constantine is tasked with retrieving a talisman from a particularly powerful demon in the bowels of the otherworld (which isn’t quite hell, but is close to being hell - but again, just go with it).

While on his journey, Constantine encounters a Charmer, Bee Dakar (whom I can’t help but wonder if she was named after the cologne Dakar Noir - very popular when I was in highschool). Bee is an entirely refreshing redhead (with curves, yay!) who is already on the case of locating the talisman and who can actually see Constantine in his corporeal form. Bee also seems to have no compunction in cussing him out and calling him to task for coming to interrupt the job she is in the middle of doing. Her trash-talking increases as he decides to leave her locked up in the cell he finds her in, figuring she’s been stymied in her quest and that she’d be far safer in prison while he goes to retrieve the talisman.

Through all of this, Constantine of course notes how attractive she is, and notes how he likes her fiestyness, yet weirdly, instead of communicating his interest in this enchanting Charmer, he starts to act like Data from Star Trek, rationally running through his list of options and trying to decide what course of action to take. He compares Bee to a former lover whom he mistakenly believed to be the love of his life (I’m kinda sure this was a holdover of the action of an earlier book in the series) and decides that Bee might be...alright. Yes, MIGHT be alright. So much for romance.

This turn of events doesn’t really compute for the reader when you think about the popular perceptions of dragons as shape-shifter/magical male beasts. We tend to think of dragons as passionate, fiery creatures who fly and swirl through the air with great whooshes of power, and breathe fire and smoke at will. Dragons,who, in their male form, dominate and take what their lust focusses on. This is especially puzzling when you learn that Constantine is in fact hundreds of years old and has had a variety of exotic lovers throughout the ages...what IS this guy/dragon waiting for?

Constantine appears to be a human poindexter who can’t seem to decide if he is an alpha-male or an alpha-douchebag. “Constantine enjoyed the view of her backside and thought of mentioning that fact, but he had found that women of this time did not appreciate knowing that their bodies were viewed with approval. “I am wise in the way of Oprah, and thus won’t comment on how charming I find your ass, but I wish for you to know that you need not have negative body issues on my behalf.””

Expressions like “Coolio”, “Dudebro” and references to Yoda somehow inexplicably break the fourth wall or whatever wall holds up this reality (and yes, I’m being facetious). That the point of the story is to get this talisman so that a curse that was put on Constantine can be charmed out of him and all the other dragons, gets lost in all of the fights and daring-doo. Through a couple of battling demons, a long-lost father and a preoccupation with sex toys into the mix and it just ends up being a bit of a gong-show of a story.

Usually, books like these are tempered by really amazing sex scenes which can make up for quite a lot of other lacking elements. However, I’m deeply saddened to say that the sex was just umm...okay, even though they used a sex toy (you can read the book to find out which one Bee was comfortable enough to choose). Really, the chemistry wasn’t the greatest between our protagonists, and this feeds into the let down as well. The inclusion of a literal disembodied and disingenuous head named Gary, (yes, he is just a human head sans body) who is meant to provide some comic relief on this ‘buddy adventure-quest’ as he rolls around in a hamster ball (Lord save me now!), but kind of ends up creeping you out when he happens to nurse a crush on our dragon-hero Constantine and offers to orally pleasure him.

To sum up, if a friend asked if I’d recommend this book, my answer would be an honest “not unless you’ve read others in the series and want to find out more about the bigger story as a whole”. As a stand alone, this book tries, but really misses the mark - and with no real sizzling sex to distract you from the rest of the other plot devices, I’d say to give it a pass.