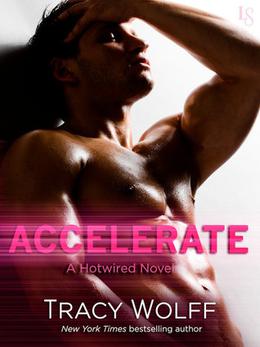 Do you like Fast and Furious? What about books about motorcycle clubs? Garages? Just like hot men and cars? Then get Accelerate. Do not pass Go, do not collect $200, get it.

Sponsored links
If you’re like myself and like few of the above things, then read on before you decide.

For those whom this book ticks the trope boxes, this is a hot­as­shit book that will melt your Kindle and possibly your underwear as we journey with Nic and Jordan through their relationship. For me, who didn’t love a lot of the tropes, the sex was still written super descriptively and well. And there wasn’t a whole lot else I can really fault it for, it just simply didn’t grab me. Possibly because I’m really wary of New Adult, which even if this is not categorized as, let me tell you chickens, it is.

Jordan, our delightful ingenue, is a college student and diner waitress who is innocently going about her business one day at work when she notices someone stealing her car. When she goes outside to stop said act, he steals her.

She quickly figures out that her kidnapper means her no harm and is way more interested in the car, but it’s still frightening and she has a flashback to another time in her life when she was held against her will. Spoiler alert/trigger warning, Jordan is the survivor of a gang rape. I’ll get back to that in a bit.

So the kidnapper turns out to be Nic, who is a local car legend whom she was coincidentally oogling the previous evening at a drag race. He takes her back to his garage to do whatever he needs with the car and one thing leads to another and before we know it, they’re all up in each other. Background stuff happening is a dirty cop that’s out to destroy Nic, a whole thing with his sister and her son, and a lot of talk about cars.

In regards to the campus rape sub­plot, let me dust off my soap box for a minute. In the story, Jordan tells Nic that she was raped by members of her university football team. By choosing to press charges, she was cast into the role of seductress and her life was ruined. Their lives were not. No consequences happened for those young men because, as Jordan says so succinctly in her telling of the tale to Nic, who would want to ruin the futures of those bright young men? Who indeed. God forbid.

I believe with all my being that sexual assault and rape happens routinely on our college and university campuses, not only in the U.S. but around the world. I also believe it goes largely unreported and that no one has any idea truly how rampant it is because women are frequently taught that the assault is not assault and they shouldn’t report it because it could ruin the dude’s life. A: boo hoo for the dude. Choices have consequences. And B: please see Krakauer’s Missoula or the new documentary The Hunting Ground or the current QB of the Tampa Bay Buccaneers for further data on that assumption.

*steps down from soapbox*

All that to say, I’m glad Wolff wove that into this plot as the more people are aware of this epidemic and they lies that come with it, the better.

Getting back to the book, as I said above, the sex is super hot and that is absolutely going to be enough to keep most readers happy. If you’re a fan of the New Adult subgenre, I think this’ll tick your boxes as well. If you like books where Alphas totally consume the lives of the heroines, then get this one 100%. Additionally, it ends on a wee cliffhanger, so it seems we’re in for more with Nic and Jordan for any of you who like getting in on the ground floor of series.

Overall, a fast­paced and steamy read, appropriate for any fan of New Adult, race cars, Alpha dudes and bad guys getting their comeuppance.