I'll Be There (The Montgomery Brothers #6) by Samantha Chase 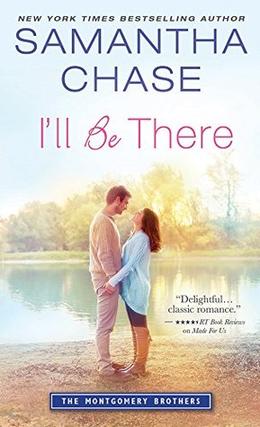 I’ll Be There is the 6th book in Samantha Chase’s ‘Montgomery Brothers’ series. This one focuses on Zach, who was seriously injured in a previous book after falling off a mountain. While I haven’t read the other books, I can gather from some interactions with other family members that the Montgomerys are a sprawling clan, who love each other fiercely and piss the hell out of each other in equal measure. Zach, it appears, also requires handling.

Sponsored links
Enter his assistant, Gabriella, who he has been in love with forever and vice versa. He’s shown his love to her by being an ass and thus she has no idea. She’s kept hers quiet because it’s her boss and she’s not an idiot.

At the opening of our book, Zach has let himself go and is now a home­bound malcontent who has fired like four dozen rehab nurses and growls whenever folks come near. The family is at their wit’s end and so they get Gabriella to go from working at the office, trying to keep up appearances to actually going to his house, kicking his ass and making him work. Combined with the help of a new rehab dude named Alex, she slowly succeeds at this.

She also, obviously, succeeds in getting his bed, because this is romance novel and that is the law. They appear to not only be compatible professionally, but sexually as well, so those passages are well written and fit with the story.

Overall, this book is fine. I’ve never read Chase before and I think her dialogue is just not quite my cup of tea ­ it often came across as stilted and not how people talk. Zach’s change from asshole to lover is also a little abrupt and I didn’t see a whole lot of justification for one of Gabriella’s major decisions towards the end of the book ­ but I recognize that a lot of groundwork was laid during previous books in regards to their relationship. I just never fully bought the two of them ­ Zach seemed like a grown­up child in a way that would not translate to him being a functioning adult even before the accident and Gabriella is a glorified emotional doormat and lawd does that drive me nuts.

Let me also just say that boss/employee is usually not my favorite trope ­ I get nervous with the power struggles and ideas about consent and full agreement, etc., in a way that few books about that relationship ever address (this falling in that category as well). I know it gets the engines humming for many others, however.

I’d say this book is lovely for anyone who has already been part of the Montgomery family ­ there’s a lot of time spent with them in this book, including Summer and Ethan’s wedding, and so catching up with the clan features heavily. There were a few passages where names were rattled off like I should know who those folks are, and I’m sure if I was a fan of the series I would have been happy to hear everyone was happy.

Based on this book, I think I’d recommend that anyone who likes sprawling families who talk sweet to one another (this is not a family where anyone appears to curse or talk about sex, by the way and it’s kind of weird) should investigate this series, and based on how intertwined they all are, I’d say start from the beginning. While this was fun on its own, I think I would have enjoyed it significantly more if I had known them all all along. I’ve personally not added this to my TBR, because the writing style is not always my taste, but I have no real marks against and may pick the series up in the future.