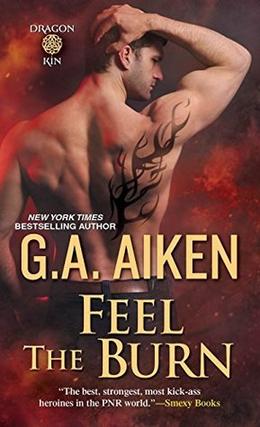 Why does every fantasy book have to be based on bloodshed and violence? And not just run of the mill, people getting stabbed during battle, but the eye-plucking and decapitations that leave most of the readers swallowing uncomfortably and half of the main characters with only one eye to live the rest of their lives with?

Sponsored links
Feel the Burn is a story about female warriors in a female dominated league that battle with various cadres of like minded women and dragon Queens and on and on it goes. This is part eight of the already established Dragon series, so I was expecting a few convoluted backstories and plots to be popping up - and I wasn’t disappointed. However, the mark of a good author is being able to have a person jump into the middle of a series and enjoy a book just as much as a stand alone as they would if they had read the entire saga, and GA Aiken is up to the challenge.

Ms. Aiken does a good job of giving enough background information on the different warring factions and their leaders, that the introduction of a whole new raft of characters is almost manageable as the action continues. There definitely is a nod to Ancient Rome in some of the naming conventions of some of the leaders of one sect, a definite Russian tone to our heroine and certainly a heavily Gaelic influenced third tribe.

Kachka Shestakova, a warrior if there ever was one, finds her wings clipped after having saved her sister and living in relative peace amid what we might consider splendour - a land of castles, lush grounds, beautiful countryside and legions of servants. But, Kachka is bored beyond belief, she wants to be fighting and leading and determining her own destiny, rather than choosing what colour eye -patch would look best on her sister (oh, the limitless fashion choices!).

Our Russian heroine starts out with grammatically correct English and then a few chapters in devolves into a bad version of stereotypical immigrant English. Something along the lines of going from “Bring me the eggs of the hen.” to “Hen make eggs, bring egg now.” This, and other small discrepancies, kind of makes me think that the book must have been edited in sections out of chronological order, or at least edited at different time points so far apart that the memories of of what standard form to apply are lost.

Thankfully, Kachka meets Gaius Domitus, the one-eyed (told you so!) Rebel King who is out to avenge his family by killing off all of his hated relatives, particularly the one who tortured his sister for five years (wonder how their Thanksgiving went?). Gaius is a tough hunk of a hunky warrior - Centurion, no less - and headstrong in the way of romance book heroes. He is noble in his will to protect his sister, and he seems to come from a tradition where the men often rule instead of the women.

Gaius, though Dragon in origin, is quickly attracted to the brutal and brutally amusing Kachka, who is human (though in some ways barely so - bloodlust anyone?). In some ways they make an odd pairing: dragon-human, noble-barbarian and the list continues, but one never knows when desire will catch one by the short and curlies. There is a decent amount of sexual chemistry to keep the story in the romance genre, but some readers might find the book too plot heavy and character heavy to be considered a ‘traditional’ romance novel.

I suppose one could call this a feminist romance novel - certainly we have to question why as women we might even raise an eyebrow or be surprised that the men in Kachka’s world are at times viewed as sex-toys to the ladies. I had to stop myself and remind myself how easily I accept when men in romance stories use women to satisfy their sexual urges, yet easily discard them for the more ‘respectable’ woman. The “respectable’ qualities usually consisting of high moral value (read no sleeping around indiscriminately) and unsullied virtue (read virgin - though thankfully this has started changing).

Maybe “feminist kick-ass n’ romance” will be a new section we can all look for in our bookstores. Kachka herself is a self proclaimed barbarian rider who prefers to kill instead of talk. In her world, men are relegated to subservient roles - child-rearing, domestic chores and sexual outlets. GA Aiken really takes the point of turnabout being fair play to the limit by having Kachka and her sister laugh at and tut-tut the sister’s mate when he tries to question their discussion about a battle - telling him not to worry his “pretty little head” about it.

The sexy-time interludes, when they happen, are good, though the main action that Kachka is tasked with by her Dragon queen overrides everything. Kachka is to find the Chramnesind cult who have been roaming and murdering priests and desecrating temples all over the Queen’s lands and kill them. Kachka’s quest and the building action towards a looming showdown dominates much of the main action and seems to be a building/culminating storyline of the previous novels of the series. Since this is my first read of the on-going saga, I’m not sure if the other books offered better by way of sex and romance or if they had the same secondary focus of their lovebirds as in Feel the Burn.

Overall, this novel was an okay read. It wasn’t the best book I’ve ever read in the Paranormal category, and it certainly wasn’t the worst, but it really focused on the action - lots of killing and mutilating, and only somewhat on the smut and romance. There are tons of strong females in this story and it certainly gives a moment’s pause for us to consider a world where ladies get a bit back on the men after the last five millennia of mostly male-dominated societies. However, if you’re looking for a super-hot, achingly romantic love story, this one may not be your best choice.