Bane (The Westmorelands #31) by Brenda Jackson 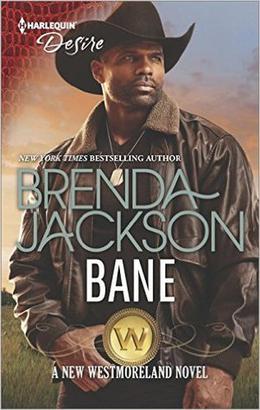 Brenda Jackson’s Westmoreland family is a sprawling, multi­generational tribe who take over a booklist that made my eyes widen. Woman is prolific. This also means there’s a bit of shorthand in this one which may be a touch confusing to folks who haven’t been in since the beginning. But I’m getting ahead of myself.

Sponsored links
Plot is fairly romance­standard. Bane Westmoreland is a Navy SEAL who is on extended leave after a deep undercover mission which lasted something like three years. He’s determined to reconnect with the woman who has his heart, after he abandoned her several years ago. And plot twist: that woman is actually his wife! He and Crystal eloped several years back, just after they were both of legal age, and against the wishes of her evidently crazy family.

However, shortly after the wedding, he disappeared! Poor form, lad, POOR FORM. Now, it was for work and he had no choice, but still. STILL! And he left with no word at all! Leave a note, dude! Anyway, Crystal’s been living her life, doing her thing, with no word from her husband. Stressful and kind of awkward, let’s be honest.

So in their time of separation, Crystal’s been going to grad school and becoming a big time scientific researcher. When we met her, she’s being threatened to beware of people sniffing around her research. She meets with folks (supposedly) from Homeland Security who want that research, but then she ends up in serious and threatening danger.

Thankfully, her erstwhile hubby shows up just at the right moment and gets her to immediate safety. As they reconnect with each other, we spend time with loads of other Westmorelands and they find their happily ever after. Also of note, the Westmorelands are an African-­American family and the nuances of that was fun to read.

I’ll be honest y’all, I find the writing somewhat stilted and kind of halting. The dialogue is a little awkward at times and I never fully believed their connection. I poked around on the internet for fans of this series and discovered that most have been waiting for this story for years. Crystal and Bane made many other appearances in the stories of other Westmorelands, so fans of the series had chance to get to know these folks over the 30 (!!!!) other stories of this tribe.

I think, therefore, that while this is a book which can in theory be read alone, it works better when you’ve been on the journey with these folks all along. And I’ll be honest, nothing about this book made me want to go back and read the rest. I couldn’t connect at all with any of these folks, I didn’t enjoy the dialogue (which is key for me above nearly all else in a romance novel) and I just wasn’t rooting for these folks.

This book was fine and fluffy and enjoyable to read, it just didn’t tick all my boxes. I didn’t throw it across the room, I just didn’t connect with it. You may, though, because so many folks do! I was glad to read other websites and see that so many folks did connect with and it and were so excited for the conclusion of this series. Romancelandia, as I’ve said before, is a huge tent and I’m always thrilled when folks find home under it, even when it’s not my taste.

Definitely recommended for fans of romance with small town sensibility, fans of the Westmoreland series and fans of the Harlequin Desire line, of which this is a good example.