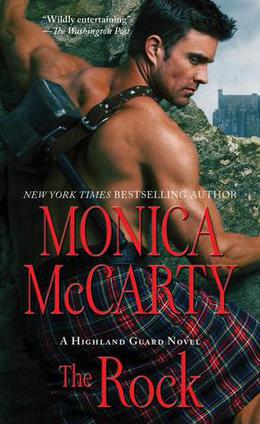 I picked up my first Monica McCarty book a few years ago on a whim. I’m sure it was the cover because damn y’all her covers are something else. The fact that I have some Scottish ancestors certainly doesn’t hurt either! I’m definitely drawn to tales of the land and while I’m usually skeptical of medieval tales ­ because the language is usually so stilted and awkward ­ McCarty quickly became one of my favorites.

Sponsored links
The Highland Guard series is all about the elite group of warriors who helped Robert the Bruce take Scotland back from King Edward in the early part of the 1300s. If you’re unfamiliar with the history of this tale, let me offer a quick summary: Scotland was not super united, more a grouping of waring and rival warlords. Edward of England took advantage of this and essentially began obnoxiously conquering group by group and claiming Scotland for England. This meant destroying local customs, forcing new religious behaviours upon them, etc. Typical overlord behavior. The Scots, however, not the biggest fans. Robert the Bruce (“The Bruce” being a title and not a name, by the way), in a lengthy and multipart war (think Hobbits vs. Mount Doom level of epic), overthrew Edward’s power and not only freed Scotland from England, but generally united it as well. Yo, super glossy summary which ignores tons of nuance, but hopefully you get the gist.

Scotland, for those keeping score, was eventually taken back by the English and formed the northern country of Great Britain which would go on in 1921 to become The United Kingdoms of Great Britain and Northern Ireland. In 2014, the Scots made a bid for independence, which didn’t go super well for a ton of reasons which have no business being in a book review! So! Moving on! Back to The Rock.

Thom and Ella are our main characters here ­ Thom being the blacksmith’s son and Ella being the daughter of the local lord of all things. This is your classic across­the­economic­divide trope with a good dash of seriously old­fashioned class structures thrown in. If that ticks your box, get this book now. Thom has been in love with Ella since she was six and he was nine. She thinks of him as her soulmate, really, but not in the sexual way since the idea of essentially a princess marrying the smithy’s son is so preposterous she doesn’t let it into her head.

They’re separated for a bit because of politics and life, etc., but when they’re reunited, Thom is certain that Ella is in love with him as well. When she rejects him in favor of a more proper landed gentry, he’s heartbroken and abandons his father’s blacksmith shop to try to train as a knight. One of the issues with that being that he hates horses and is better at making swords than wielding them, but Thom seems to be fueled by heartbreak and bless him, who wouldn’t be.

There’s a whole bunch more story ­ we hang out with The Bruce himself for a wee bit even ­ before these two take their heads out of their respective asses and find their happily ever afters.

I think everyone should get this book and this whole series, to be honest, but this is absolutely not one that folks with bents towards historical romance should pass up. McCarty’s level of research is astounding ­ she actually has afterwords in all her books which detail her research and exactly where her characters fit in Scottish history ­ y’all it’s so cool! The customs and patterns of relationships are authentic, the dialogue is snappy and the sex is athletic. (He’s a blacksmith, y’all. Think of the back muscles.) The way the characters relate makes them feel so real that they pop off the page. I understand history better because she wrote about it, it’s just that simple.

The Rock is wholeheartedly recommended for folks who like historical romance, particularly about Scotland, books with sassy heroines who need to be taught a lesson or two, strong heroes who desperately need to be reminded to take their heads outta their asses, and history lessons that feel more like stories than tomes. Another winner for McCarty -­ cannot wait for the next installment.