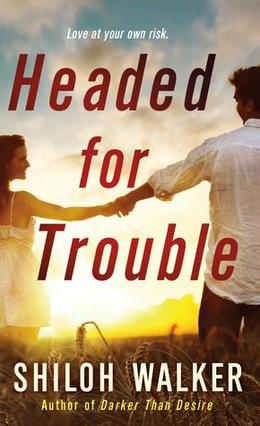 Headed For Trouble by Shiloh Walker would have been a slam dunk of a good generic love story if it wasn’t for one very large, rather unbelievable coincidence that connects the very disparate characters in this novel. Most romances try and take us on a trip through a world or a life that we will never experience, but it should be at least plausible.

Sponsored links
We start out with our heroine - Neve McKay, a young woman of 28 who has been on her own for the last 10 years, estranged from her extremely rich family. She returns home to her small town in the South of the United States with the idea that it’s time to stop running from her demons and finally put down roots. Fix things with her family. The only kink in this plan is her sadistic ex-boyfriend who had carved his mark into her, literally, who has been hot on her trail.

Rolling into town with a scrungy backpack the only thing to her name, Neve has been through hell and back with one William Clyde - the dashing Englishman who groomed her, isolated and abused her for his twisted pleasure. He had already followed her across England and now Neve is wondering if he has followed her across the pond as well. After fighting a heartbreakingly hard battle to rebuild her self-worth and self-esteem, Neve is ready to become part of her family again.

Needing a moment (and quite possibly a drink) to steady her nerves before making her entrance, Neve walks into the local bar to grab a bite and slams right into the gaze of Ian Campbell, six plus feet of bearded, bright eyed Scotsman. The electricity is palpable. The chemistry explosive. Looks fly, short banter is exchanged before a plan is hatched to meet at the end of Ian’s shift. They are not even out of the door before contact is made.

Pushed up against the wall, they practically devour each other and one orgasm is had before the need to fully fuck grabs them both. But a condom! Alas, as neither do “this kind of thing” on a regular basis, neither of them has a condom on their person. What to do!? Why a trip to the drugstore, of course! While Neve waits outside, she is accosted by a high school acquaintance who proves to be such an ass that she flattens him on his ass - attracting attention of the local authority.

To make that long story short, the local law is the former flame of her older sister and one of her dearest old friends. As Ian comes out of the drugstore, he overhears her name and is shocked into silence - Neve proves to be the sister of his best friend and business partner. Suddenly Neve is a hot potato - one that Ian drops in his shock - because of the bro code. Neve ends up going home with the sheriff and crashing on his couch before facing her family the next morning.

Ian and the hot sex has to wait while Neve revisits her history in the form of her troubled relationships with her brother and sister. Their backstory is one of tremendous loss that overshadows their immense wealth. Nothing can buy the happiness that family provides.

When dealing with memories of William Clyde, we see her confidence, power and intelligence guiding her fragile emotions as she battles to shed the chains his abuse shackled her with. As Neve deals with her growing desire and attachment to Ian, we see her vulnerability diminishing and her growing confidence as she becomes his lover in earnest - enjoying and asking for things that please her sexually. I love this dichotomy. Neve is portrayed as a woman in all of her many states and stages of emotional and intellectual flux.

As Neve and Ian develop into serious lovers, William Clyde makes his way to her town, ready to reclaim her after his stint in jail for carving his “x” into her body to mark her as his own. You can probably figure out the rest. He stalks her, finds a way to get her alone and makes his move. Despite being surrounded by the people who love her and who want to get their revenge on the man who made her life hell for years on end, it is Neve who finally ends the hold that William Clyde has on her life. A rather surreal scene, it makes for a TV-movie kind of ending.

Ian and Neve end up together, but surprisingly, what caught my interest more than those two (once the heat from Ian and Neve’s lovemaking had cooled down), was the two sub-romances of Neve’s siblings. Her elder sister Moira and her old flame Gideon are most surely going to become a spin-off book - Gideon is heart-wrenchingly in love with Moira, so much so that he tears himself away from their torrid kiss because he just can’t subject himself to the heartache a one night stand with Moira would bring him.

Even better is older brother Brannon’s hot hook-up with Neve’s high school bestie who now resides across the way from Brannon’s condo and always seems to see him through his windows as he exits the shower nude. Her unwavering gaze and his unwavering hard-on from it really serve to create the basis for an amazingly electric hook-up that happens in the course of this book - a sort of ‘bonus’ bonk for the reader!

Overall, this book has excellent sex, interesting characters and a plotline that keeps the action moving. The spoiler to all of this is fun is when you find out William Clyde’s unlikely connection to Neve’s family that kind of registers as unbelievable. However, it’s not enough to negate the appreciation for the rest of the story and Shiloh Walker is gifted at building and writing sexual tension like no other.