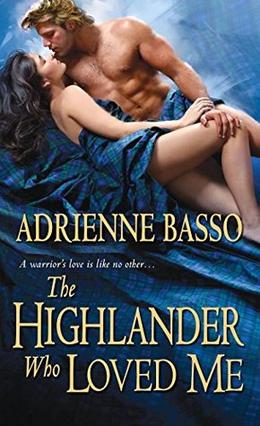 James and Davina shared a storybook love. A love that lasted through his running off to the Crusades and her overcoming her crippling fear of men. Parted by devastating circumstances not of their own making, James and Davina get a second chance at love when their eyes meet across a crowded room. Too bad it happens while James’s older brother Malcolm is trying to woo Davina to be his bride, just at the moment James returns fresh off of a tour in the Crusades, ready to put his past to rest.

Sponsored links
Adrienne Basso is an extremely skilled writer. Her dialogue, characters and sex scenes are all first rate. The sex scenes are especially well described and sizzlingly hot! The plot, however, leaves a little something to be desired... I say this because though The Highlander Who Loved Me has all of the elements of a great romance book, setting up the second chance at love that James and Davina get, happens in a very harsh, yet roundabout way.

While falling in love, the two innocents are set upon by a band of ruffians who beat James into unconsciousness and attack the 17 year old Davina, leaving her forever unsure of her virginal status. For a romance novel, having the hero beaten and vanquished in the first chapters is an highly unusual plot twist used by Ms. Basso. Normally, the hero is triumphant in any contest he is involved in. Ms. Basso also physically compares James to his elder brother Malcolm in the initial pages, and Malcolm comes off as the more eligible bachelor, with James being younger and shorter and less muscular - a pup, compared to the Alpha Male.

While all of these red herrings make perfect sense at the end of the book, making your way through the first section, you will have cause to second guess just who the male protagonist of the story is going to be - Malcolm or James?

As for Davina, most romance novels would start the story of our tortured heroine after the traumatizing attack has occurred, Ms. Basso takes us through the terrifying attack and the brutal aftermath of heartbreak the young lovers experience. Davina has been beaten, bruised and brutalized to the extent that even talking to James through a closed door turns her into a panicked mess. So in her shock she sends him away - believing herself soiled -and that such a state would never be good enough for him. James, foolish young man that he was, takes her at her word and leaves, deeply ashamed that he was unable to protect her and believes that this is the reason she has rejected him.

For the next five years, each lives in their own purgatory. James fighting his way to the Holy Land, and Davina, strung out on potions that numb her feelings, hiding from the world behind the high walls of her Uncle and Aunt’s castle. Davina earns the reputation of being a recluse - odd and fearful around men, she has endured and not lived except as a shell of the woman she once was. As she nears her fifth year in self-imposed exile, she begins to tire of hiding and of drinking the deadening potions that keep her from life. Slowly she wills herself to face her fears and think about the life she wants to live.

An invitation from James’ mother is just the opportunity she was waiting for. It scares her to her bones, yet elicits the first interest she has had in leaving her castle enclosure. Before she even has a chance to fully get consent from her Aunt and Uncle, James’ brother Malcolm arrives at the castle, ready to privately escort her to his home to visit with his mother at length. Off she goes on her journey to the unknown - with some excellent descriptions of her inner battle with the anxiety and panic that she works incredibly hard to keep at bay.

James mother is something of a catalyst for the entire novel. It is her actions that cause Davina to be in place for James’ unexpected homecoming, and it is his mother’s words of advice and wisdom that cause Davina to entertain the attentions of both Malcolm and James, even though she has resigned herself to never wed. ‘Wait and see’, is basically the advice given, as well as one of the most astute accounts of the continuum of relationships and love that I’ve come across:

"Some couples start out in love and lose it, others find love through the years together and come to cherish it. For some love is a great passion, for others ’tis comfort and security. Sometimes it matters, sometimes not. There are those who feel betrayed by love and others who are relieved to be spared the complications."

What is lovely about this book is the journey of Davina’s self confidence and rebirth as a fully functioning, loving and aware woman. The innocent and trusting Davina we meet in the beginning of the novel becomes hardened and transformed by tragic circumstances, and then experiences a rebirth into a caring, compassionate woman who has much love to give, and only needs to trust herself and her instincts to find her womanhood once again.

Another enjoyable transformation is James’ journey to forgive himself for being a human being with failings. As a second son, he understands that he will always be the lesser of the brothers in terms of power, inheritance and responsibilities in his Clan. But as a romance novel hero, it’s not common to find a hero who is anything less than strong and unbeatable. But James is all of that and more. He leaves for the wars a young man, broken in spirit and hurt in love. He returns a warrior, taller, broader and having seen and lived things that have hardened him to all others. Yet he opens himself to his family and to Davina once more.

The best thing about this book is Ms. Basso’s fantastic ability to build the yearning and sexual tensions to past the breaking point for both characters. Sure there is a not really necessary sub-plot of some nefarious actions done to rob Davina of her inheritance, but it pales when James and Davina explore each other sexually. The scene where James stays passive and allows Davina to set the pace for their lovemaking, so that she can once and for all conquer her fear of men and regain her love for James all at the same time, will leave you breathless and aching for more. This is definitely a book that you will go back to re-read certain parts over and over and over again. Overall, this book will leave you sated and feeling like the love story of James and Davina is complete.