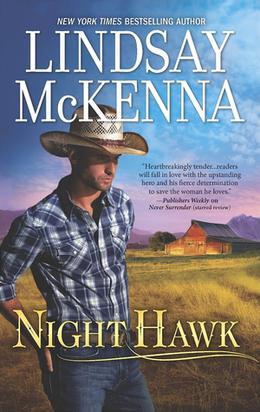 Night Hawk is the latest in Lindsay McKenna’s Jackson Hole series, the 10th in fact. I’ve never been to Jackson Hole, or to Montana in general, so I have nothing to go on but McKenna’s version and hers makes me feel all warm and fuzzy inside. McKenna’s Jackson Hole is a place where the good guy always get the girl, the ladies are treated with dignity and happily ever afters are mandatory. This is my first encounter with McKenna’s work and I have to say I found it very enjoyable and would definitely be open to returning to this world.

Sponsored links
This happily ever after tale regards Kai (which I always thought was a name for a fish and then my best friend corrected me that that’s ‘koi’ and I felt really stupid) and Gil (which fits with my erstwhile fish theme). They knew each other in a previous life when Kai was married to one of Gil’s best mates.

Best mate was a bit of a wet towel of a husband, but Gil doesn’t know that. They were in the same military unit together and that’s how Gil and Kai got to know each other. When hubby/bestie unfortunately is killed in combat, the two bond slowly over the death and the recovery from it. After a while, sex enters the picture and for Kai, this is a new piece of their relationship. For Gil, he’s been dreaming about it forever.

But because communication is neither of their strong suits and then the military intervened to send Gil away for a number of years, they lose touch and Kai begins to harbor quite the resentment against Gil for abandoning her.

Fast forward to the start of our story. Kai applies for a job at a ranch in Jackson Hole (belonging to, I’m assuming, former characters in this series because that’s just the vibe I get) as their mechanic. She gets said job (I love it when ladies do un­stereotype jobs in books like this) and then finds out that Gil is working on the same ranch because OF COURSE HE IS. Sparks fly, but not the fun kind at first, before they finally decide to be honest with one another and the journey to the happily ever after gets a kick in the ass.

Overall, this book was charming and lovely. A gentle romance that felt like they could option the script for a Hallmark Original Movie at any point and I mean that as a complement. I had a problem with one section of it ­ I’ll get to it in a minute ­ but overall, I’d recommend this to anyone who likes ranch books ­ this isn’t pure cowboy but it’s close enough that I think it would tick trope boxes. Surly dude who hates being honest until his lady’s magic vagina lulls him into emotional honesty? Check. Strong lady who takes no bullshit, but is surprisingly stupid and/or vulnerable when it comes to decisions of the heart? Check. So, take that for what it’s worth.

My problem with this was a subplot that involved a local douchenozzle who may or may not be involved in human trafficking and has an obsession with Kai that actually puts the two main characters in physical danger. Not only does it seem SUPER left field that this dude would be lurking in a location like this with no consequences, but the resolution is odd and unsatisfying. I’m hoping that she plans on picking this one back up in a future book so it’s properly handled because this was slightly hamfisted.

Overall, recommended for folks who enjoy cowboy romances with emotional connections, stories where good guys win and bad guys slink off into the sunset with their tails between their legs, and love stories that are just this side of sappy ­ in a good way.