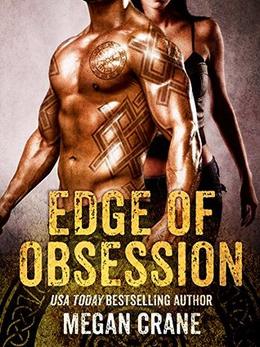 This is one rip-rolloicking ride of an adventure! Megan Crane really knows how to keep the anticipation growing and ratchet up the heat until you think you will explode into a thousand pieces!

Sponsored links
The post apocalyptic world of Megan Crane’s civilization exists hundreds of years in the future. There are remnants of the civilization that we know, but there is a new world order in place. Imagine a Lord of the Flies scenario happening after floods and storms have killed off most of the population and covered most of the arable land. The wealthy, the Church (or churches or bastardizations of churches as you may be familiar with them) have all staked their places in the hierarchy of powers that survive in this dog-eat-dog world.

Ms. Crane has done what many authors of futuristic fiction (especially in a romance novel context) have failed to do - she actually makes a tenable, believable and exciting world that stands the test of logic and introduces some novel concepts along the way. One that I particularly like is her take on marriage. Since the purpose of most of the men and women in this world is to create babies and repopulate the earth, marriages are now seasonal - the summertime is to give birth and to do the productive work of farming and food/resource gathering. The dark winter times are for “winter marriages” meant to keep people mated, sated and compliant.

To that end, sex, in all of it’s beautiful, glorious, dirty and sexy forms has been reduced to it’s basic textbook function - to procreate and not to produce pleasure. Mating between the ‘compliants’ as they are known, is often a quiet, short, sometimes embarrassingly apologetic affair. Such a bedraggled, almost medieval existence the compliants live, day in and day out, fearing other more powerful clans - especially the Raiders - the soulless, Godless, bloodthirsty criminals that roam and plunder at will. Guess where our hero will come from?

The heroine Helene is a beautiful grey-eyed woman in her mid twenties. Intelligent, tasked with an almost impossible task by her family, she has backbone to spare - not to mention a deranged madman chasing her hoping to annihilate her and her knowledge of how to turn the electricity back on for the portion of the world that has survived thus far. Helene is constantly drowning in the backwardness and stupidity of the rank and file compliants she is surrounded by.

So it comes as little surprise that Helene dares to insult a raider who enters her village. Raiders being the last of the free-living groups who bow to no man or God - the brutal barbarians that live like animals - if Helene is to believe the childhood tales she has learned about these men. Tyr - the braided, tattooed and chiseled hunk of raider brutality, takes her away from her village, away from her family and into the unknown as his captive. Helene finally starts to see the world outside of her experience, she finally has an opportunity to live as she is meant to and her capture marks the beginning of their mutual obsession.

Tyr and Helene are each smitten, though they cannot rationalize why - two more opposite people could not exist. There is a splendid inner-dialogue of the slow and often miserable realization that they are - oh God no! - turned on by the other (shudder and squirm!). Each is somewhat shamed by wanting the other and they spend a great deal of time trying to fight their interests and urges.

Sex for the Raiders is something to be celebrated and enjoyed. They delight in fucking in public and in sharing their partners whenever and however they please and only with permission of the women themselves, as we pointedly find out later when Tyr takes Helene to his home city. What on first glance appears to Helene as a wild and awful place of debauchery, slowly comes to make sense to her as she realizes that there are rules and guidelines that govern the interactions of all of the Raiders as she settles into life in their hideaway hidden island. Tyr, she is stunned to realize, is a respected man of honor.

The Raiders live hard and party hard. Helene is the portal through which most of the readers will find themselves accessing this world - it is all new and seen through her analytical eyes. Her journey from ‘compliant’ sexual partner to a wanton sensualist becomes the journey of the reader. This feeds into most of our exhibitionist fantasies. Our entree into the Raiders world of pleasure and wild sex is guilt free and pregnancy free, thanks to the herbs that the raiders slip into all of the women’s drinks. Sex is to be enjoyed as often as possible - not because the Raiders are layabout hedonists, but because life is often short and brutal in their experience.

There is much killing and slaughtering in this book, and it can get quite bloody and, um, somewhat spine chilling - but this is the reality of the brutal (sorry I keep using this word - but it fits the sentiment so well) reality of the world as it exists. You can probably tell that I was captivated by the world Megan Crane created. After reading so many romance books with fictional worlds, societies and futuristic civilizations, I can't tell you how refreshing it is to come upon an author who has actually created something that could rival a Game of Thrones as a broader story to tell. Granted there is the similarity of differing factions, with differing goals and ways of living - but that forms the basis of all good serials.

What really puts Megan Crane over the edge when compared to other authors in the same genre, is her skillful ability to make the sex a huge, hot and necessary part of the differing worlds and philosophy.