Strip You Bare (Deacons of Bourbon Street #4) by Maisey Yates 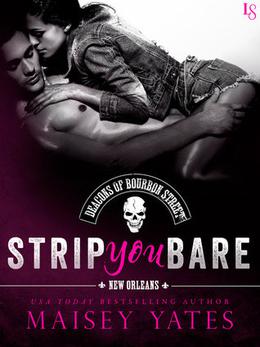 When I was in graduate school, I lived in an apartment complex right on the river which ran through the town. I loved my wee apartment, with one caveat. One of the years I lived there, every night for about six months, at 2am and 4am, a conglomerate of motorcycles would roar past my house and park down the block. There was revving (SO. MUCH. REVVING.) and a lot of loud laughter. I was in a particularly intense part of my program and was reading a lot of heavy books and writing complicated theoretical passages. Me and motorcycles pretty much broke up at that point, not going to lie.

Sponsored links
Although, that’s when I learned I could be super productive during insomnia, so good came out of it.

Fast­forward to the last few years when motorcycle clubs are all over Romancelandia. They’re staring at me from the covers of books, glaring at my awful memories of that season of exhaustion and taunting. “You think you got rid of us,” they’re saying, “but you were wrong. BWHAHA.”

Maybe I’m taking trends too personally, but I am telling no tales to say I avoided this subgenre like the plague. And then I start getting asked to review them. Lovely authors who have spent months and months crafting their stories are asking for me to take time to get to know their characters and I start to feel like the world’s worst human for rejecting these stories outright just because I lost some sleep once.

I had some nervousness about the gender politics and told myself that’s why I was avoiding the books, but as my knowledge of those politics come from listening to podcasts about Sons of Anarchy, I was completely out of mature excuses to not at least try. So I did. A few weeks back, I read my first MC book and was intrigued. Not a full convert, but my automatic reaction went away.

So all of that to say, I come to Strip You Bare with baggage before I even open the book. I know there are so many folks who see this cover and their metaphorical engines start running. They read about Micah and Sarah and say, “yes, please, all of that right now.” And for those of you for whom that is true, I think you’ll love this book. Honestly. It’s fun, flirty, dirty, sexy as all frigging hell, and all the characters feel real.

Brief summary: Micah has been sent by his club to take possession of a house they hold the title to. He shows up to discover that the original family still believes they own it and that the youngest debutante, Sarah, has taken up residence. She is, in fact, planning a Christmas party there. Sparks fly, both sexual and anger, and they have a few hiccups on their way to the happily ever after. If you’re into rich folks hanging on the wrong side of the tracks sort of stories, then this should be your catnip.

All of the reasons I didn’t fall completely for this book are things that make the genre work for so many folks. I didn’t buy Sarah’s transformation being authentic and instead felt like a rebellion against cotillion culture ­ but the introduction of the heroine into this underground MC world is such a staple of the genre that I’m sure that’s not going to bother many other folks. I didn’t love some of the dudes, but I’m also not a recorded fan of Asshole Alphas, which many of these dudes seemed to be. Again, this is stuff that’s on me, but I still enjoyed it!

Thus, this one is recommended wholeheartedly for fans of MC books, folks who are already reading this series (I don’t think it’ll disappoint you), and anyone who wants to dip their toe into the genre. I think this is a good example of why folks love these worlds without being too off­putting.