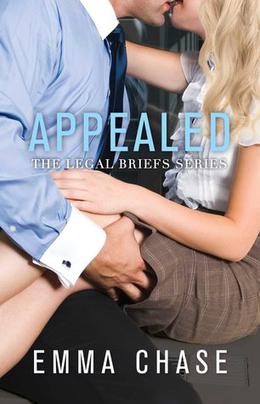 I cannot imagine that it’s very easy to write an entire work from the point of view of a character radically different than you or from your experiences. And I doubt I’m going out on a limb to say that Emma Chase has done just that in making Brent Mason her voiced narrator in Appealed. Not only did she do it, readers, I think she nailed it.

Sponsored links
There’s another point about that I’d like to pause on: romance is a genre driven by women. Scholars generally agree that what defines the boundaries of the genre is that they are female­driven stories with clear resolutions of happily­ever­after. By “female driven”, we mean that the main women in the books are never bystanders, are never just accessories to the men’s plots and ploys, and are instead the instigators of the plot and the drivers of the narrative. For most authors, that means that they either put the narrative in the point of view of the main female character, or they put the narrative in a general third person. Even if the point of view shifts from chapter to chapter (which is a literary device frequently employed in Romancelandia), it is rare to read an entire book in the dude’s voice.

Appealed is a second chance story of Brent and Kennedy that is told entirely from inside Brent’s head. You hear his thoughts on Kennedy, his memories and strategy for getting her back, his confusion over her choices ­ but Kennedy drives this story. He reacts to her, he forms his choices and his life around her, not in a dependent way, but in the way that most couples who are starting to build a life together begin to center their lives around themselves as units instead of as individuals.

They grew up as rich kids in Blue Blood America, both packed off to the same boarding school, where they had a budding romance that was squelched by a disgusting misunderstanding that really could only happen in high school. The event is described slowly, in painful memories and shocking moments of vulnerability, and reading the healing of that as these two found their way back to each other was lovely.

They meet again as opposing counsel over a case about a lonely kid who makes a big mistake. They start sleeping together pretty early on, and it’s so fun to watch how they make each other better in their professions. Brent is a defense attorney, while Kennedy is a federal prosecutor and after their case is over, Brent helps Kennedy on her next one. A “if I was the defense, this is what I’d do so be prepared” kind of situation and it’s lovely to watch them move towards each other in that way.

As this is the third book in Chase’s Legal Briefs series, the players from the first two books are there and checking in with them is fun. This is a series that builds on one another ­ I read them out of order and was never lost, but I can tell that if I had met the characters in the order that Chase intended, the story would have been richer. Dive in at any point then, but please dive in. These books are delightful.

Recommended for folks who like witty dialogue, dudes who stand up for honor but not with weapons, ladies who grow into themselves and know exactly what the hell they want, and people whose happily ever after is a long time coming but all the sweeter for it.