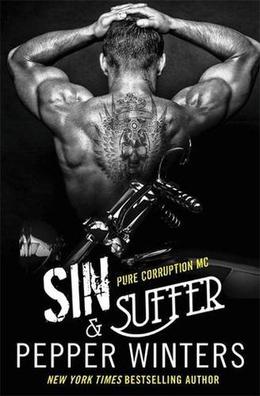 This book has it’s revenge. A lot of revenge. Love is found, lives are lost and the sex is molten hot. The question this book asks the reader is: can the sex and love redeem the violence and bloodlust for revenge of the main characters? The answer is complicated. A resounding yes and an equally thoughtful, no, depending on whether you have read Pepper Winters first novel in this series, called Ruin and Rule.

Sponsored links
I absolutely loved Ruin and Rule, and you will find my review for it on RomanceandSmut.com in the reviews section. Ruin and Rule had a really hard driving edge to it’s story. It is the kind of book that has you cringing, then rereading the juicy bits and hoping all the while for the story to never end. It is intense, horrifying and magnetic, all at the same time. By the time you finish reading it, you have familiarized yourself with the violent world and inner workings of one particular Motorcycle Club and the scum they have to deal with if they truly want to legitimize themselves.

With Sin and Suffer, Ms. Winters takes the reader back to that world on the edge of decency, where bad things happen to bad people and sometimes good comes out of the bones and ashes the bad people leave behind. You will have to find your own answers to the question of whether love can redeem all of the destruction you’ll encounter - and it is a tough call - some readers may never be able to stomach the decisions made in Sin and Suffer.

I read Sin and Suffer as the continuation to the series starter that had gripped me by the short and curlies and took me along, sometimes protesting, for the scary and sexy ride it’s pages contained. Sin and Suffer is not much different than it’s predecessor Ruin and Rule. There is still the graphic violence as it deals with familial battles, abuse, inter-gang fighting and the power struggles inherent in father and son, mentor and protegee relationships.

We get back to the brilliant and ruthless Arthur “Kill” Killian - the green-eyed, dark haired, muscled mix of hardened criminal, mathematical mastermind and socially conscious do-gooder. He is an independent thinker who wants to use his gifts, wealth and position as President of a Motorcycle Club to make the world a better place. Only thing is, that he can’t do that until he can torture and kills his father and brother and wipe their slime and evil from the face of the earth. Yeah, some families have it bad.

Cleo is his childhood love and heir apparent to the Dagger Rose rival Motorcycle Club that Kill’s father now runs. Cleo, whom Kill had believed dead for eight long years, encountered her in her amnesiatic state in the first novel as he tried to sell her into white slavery. Their path back to each other was cemented in the first book with lots of anguished sex, emotional revelations and heart-rending love. Sin and Suffer picks up exactly where the last story left off - with Cleo in the clutches of Kill’s sick and sadistic father - held prisoner on the Dagger Rose compound.

As a stand alone, this book probably wouldn’t rate as high as it does as a part two. Though Ms. Winters does a really excellent job of filling in the backstory in such a way that the information is given at appropriate times and in easily digested doses, the overriding violence and need for vengeance overwhelms the romance for the first portion of the book. A reader new to the story might wonder if it is a romance novel at all.

All I can tell you is to hang in there, and you will be justly rewarded because once you hit the sweet spot of Kill and Cleo’s sexual heights, all the retribution, plans for revenge and plans for the future start to mesh and fall into place. You’ll definitely be glad you kept reading. Especially since there are quite a variety of sexual scenes to come (no pun intended). One thing Ms. Winters truly excels at is breathtakingly, achingly, fantastic and energetic sex scenes. These people love each other with their bodies, minds and spirits - and their couplings are definitely not to be missed.

Another thing that really struck me about this book is the extent that Ms. Winter fleshes out her supporting character roster. Usually, romance books - even if they are highly plot and action based - don’t often spend too much time developing rich, believable characters, much less delve into the relationships (past and present) in the skilled way Ms. Winters does. This is a talented writer who quickly and surely draws you into her created world and gives you a front row seat to all of the action.

The emotions, the actions, the violence - all were believable and real, and I hasten to say, necessary to the plot. I certainly am not a lover of graphic hand to hand violence, much less thoughts of white slavery, but Ms. Winters made sure to let us experience the soul-killing depravity and deadening ways of some motorcycle gangs. As an author, she makes what I consider to be an excellent decision to ensure that none of her characters are purely lily-white. Each and every one of them is capable of love, loyalty, violence and vengeance. Much like real life.

Ms. Winter’s skill at bringing all of this to us is what makes this novel and her writing a cut above the formulaic boy-meets girl romances of old. Sure there are a few plot twists that are a little out of the realm of our daily lives - amnesia, government corruption, seeing someone having their throat slit in front of us (still recovering from that one), but those elements are what give the escapist in us a ticket to ride.

This is a thick and juicy read. It’s an even better experience if you go back and start the story at the first book, though you will definitely enjoy this one on it’s own. There are also hints - very subtle hints at which characters may next get the ‘novel’ treatment, but it’s done so delicately that you can never really know, and we’ll just have to wait for Ms. Winter’s next effort.

This book rates a 4.5 out of five stars.