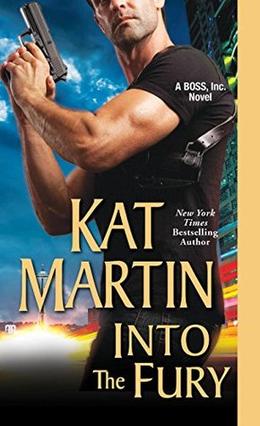 Kat Martin is a trusted name in romantic suspense and Into the Fury proves just why. It’s the kick­off of her new series, BOSS, Inc, which stands for Brodie Operations Security Service. It -­ at juncture of this book -­ is a PI, a bodyguard, and a bounty hunter who are for agents for hire. This one follows Ethan Brodie, who is the cousin of Nick Brodie of the Brodies of Alaska series for anyone following along at home.

Sponsored links
Ethan was a homicide detective before leaving and joining his cousin’s private firm. His assignment in this book is to find and stop a psychopath who is threatening high class models. La Belle Lingerie is like if Victoria Secret did their fashion show on tour with the models wearing super expensive jewelry alongside the undergarments.

Valentine, our heroine, is new to this whole modeling thing. She’s a woman with a knockout brain who happens to have a killer body and a mountain of debt alongside big dreams. When La Belle puts out the call for open auditions for this next tour, Val jumps on it. The reality of being a model, however, is more arduous than she expected and I think she’d be hard pressed to actually identify as one. She inner monologues a few times that being a body on a catwalk is simply a character, which is why she created Valentine. Her birth name is Valerie and it is what she goes by to friends and family.

Ethan has a big old friggin chip on his shoulder and immediately judges all the models as vapid and useless. Our pal Val knocks him on his mental ass early on in the book and their relationship grows from there. One of the problems that I often face with romantic suspense is that the characters are having this insanely sexy moment and all I can think is “SOMEONE IS TRYING TO KILL YOU. THERE IS A TIME AND A PLACE, PEOPLE.” It takes a special skill to both hold the suspense and give us sexytimes and Martin is one of the best. Their relationship was a slow burn because of the whole threat of life thing, but it builds well and I loved the emotional intimacy being formed alongside the sexual.

When I was younger and less world­weary, (I know that sounds melodramatic, but I’ve had some jobs that have forced me to mentally marinate in the worst parts of humanity) I think some of the things in this book -­ especially the final reveal which I will not spoil -­ would have made me me roll my eyes. “Ugh,” I would have said, “that’s the easy way out.” Now, I say “Yeah, if I read that in a newspaper I’d believe it.” That line is crucial for me in romantic suspense, a genre about which I am super picky. It’s not one I visit often for a variety of reasons, so I try to make the visits count. Martin is a name I trust to walk the balance between keeping me on the edge of my seat but also make it fit within the world we all currently live.

I poked around some other review sites, as I am wont to do as I like to see what vibe the book is creating. I always do this when I’ve formed my opinion and written my notes, by the way, because my job is to offer my opinion, criticism, etc., but I’m also curious if my opinion is an island or the norm. I’m happy to report that the internet hive mind agrees with me on this one. It’s a tightly paced, suspenseful and sexy ride from start to finish. We’re all glad the Brodies are still part of a growing literary canon and we’re excited to see where Martin goes next with BOSS, Inc.

Heartily recommended for folks who like suspense (clearly), folks who like women putting men in their places, people who like to read hot sex scenes happening a few pages away from mortal peril, and those who aren’t averse to the seedier sides of life.