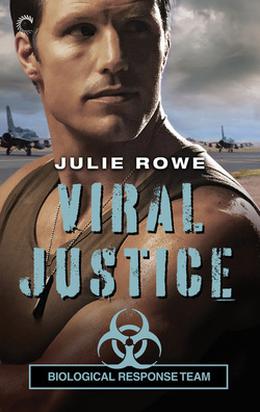 Imagine you’re sitting in a theatre and a movie starts playing about fifteen minutes in. Because you’ve seen movies before and the plot is not necessarily overly complicated, you take about five to ten additional minutes to get your bearings but then you can immerse yourself. You really wish you had those first few minutes though, as those are usually spent introducing the audience to the world of the movie. Each piece of fiction has its own universe it exists in ­ even if that world is similar to reality. Because each audience member (or reader or listener or whatever) brings their own reality to it, one of the important steps of the creative product is that introduction phase. It’s a tricky one; too much exposition and the audience feels lectured to, and too little and the audience feels lost.

Sponsored links
Viral Justice is missing the first twenty minutes of the movie. Now, it’s the third book in a series about biological weapons and warfare and from all accounts this series is a rip­roaring romantic suspense juggernaut. I can’t speak to that as this is the first book I’ve read. Some folks are saying it could be a stand alone book, but I think it’s actually done a disservice by saying that. The first twenty minutes of this movie, to keep my analogy going, clearly took place in the first two books. Thus, the problem is not with this book, (which for the record was a fun and exciting read once I figured out what the hell was happening), but with the idea of starting series like these midpoint.

People who watch TV know there are series you can jump in and out of with no problem, and there are other series where you need to know the world or it won’t be enjoyable. Law and Order is a different animal than Breaking Bad which is a different animal than Supernatural. I have a feeling, like Supernatural this series is one you can jump into midstream (I did, clearly) but you lose some richness of the story. So all of that to say ­ if the idea of biological weaponry and an international manhunt for a psycho warlord ticks any of your boxes, get this whole series and start from the beginning. Our hero and heroine get their happily ever after within this book, but the epilogue leaves you knowing the story isn’t over yet.

I have a personal policy that I never do plot summaries of suspense novels as every reader deserves to be just as surprised as I was. Once I situated myself, the plot was tight, the evil guy is super evil and super compelling, and the chemistry between the two is fantastic. This is an alpha heroine, beta hero story and I know there are loads of folks who are into those. Beta heroes are on the rise, and if you’ve never encountered one, I think they’re often breaths of fresh air after all the alpha testosterone flying about.

On its own merits, this book is good. Solid. Enjoyable. Suspenseful and satisfying. All words I would use. I have this feeling, though, that if I had started where the story starts, I would change the words to fantastic, engaging, and ohmygoshgivemethenextonenow. Have you read the first two? Could you let me know? I’m not currently inclined to add the first two to my TBR (mostly because suspense is not my go­to subgenre and my review backlog is hovering around 150), but I’m open to being convinced!