Wickedly Ever After (Baba Yaga #2.5) by Deborah Blake 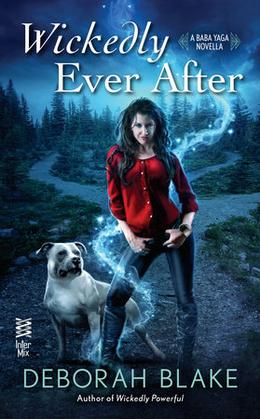 Wickedly Ever After is a fairy tale. It has all the elements we remember from childhood. A lovely lady, a charming man, a problem that needs solving and the challenge of an impossible task, or three, to complete so that all will be right with the world.

Sponsored links
Buckle up chickens, you’re in for a completely smooth and clean ride!

Our heroine is an actual Baba Yaga, a creature you may recall from tales of yore, but more on that in a minute. This Baba Yaga is a beautiful, five foot ten brunette named, ahem..Barbara Yager. Barbara rides a motorcycle and delights in wearing leather and has a silver Airstream trailer that she can commune with emotionally - sometimes the trailer pouts if she doesn’t spend enough time in it. Most wonderfully, she has a wardrobe in the Airstream that is the portal to the Otherworld from whence she came.

The Baba Yaga stories of Eastern Europe are a crowd favourite with young kids, as Baba literally translates into old woman or Grandma in various slavic languages. The Baba Yagas of lore often were magical creatures who granted people’s wishes, with a twist, that often left them wondering if they were better off before their greed or desires got them involved with her magic. For example, she might make your pot cook a nice noodle stew...but it won’t ever stop and soon your village will be filled with noodles. The bottom line is always be careful what you wish for when dealing with a Baba Yaga!

While I spent a few pages waiting to see Barbara Yager’s trickery unfold, I started to realize that this wasn’t going to be an action adventure kind of paranormal story I anticipated. Yes, there are dragons, witches and various subspecies of magical and human hybrids, but the story was focused on Baba Yaga’s personal life. Now that Barbara had found and fallen in love with Liam, they wanted to be wed in the Otherworld so they could form a proper family for Babs.

As the story opens we are given a tight synopsis of her last adventure, which has left Barbara completely and utterly in love with one hunky dunky sheriff named Liam. Barbara and Liam are now the de facto parents of a lovely little-girl-Baba-Yaga in training. Babs, a Human of seven or so, had her parents killed when she was kidnapped and taken to the Otherworld to be given to Liam’s now ex-wife, who was some sort of supernatural something.

The objective was now a trip into the Otherworld so the Queen could perform the hand-fasting ceremony for Barbara and Liam and, just as importantly, to gain permission for Liam to drink from the special water that would slow his aging such that he would be able to live forever-ish with Barbara and Babs (who got to drink it because she was a Baba Yaga in training).

Of course, for the story to have any legs, the Queen refuses their request outright, and when challenged gives them three impossible tasks to perform if they want to have a hope of being wed and living forever-ish together. So, off into their Airstream they go...across America to find the answers they seek. At each of their stops we learn a little more about them and about their wild, wacky and nerdy friends.

Deborah Blake could just as easily been a children’s writer, as she can spin a good clean yarn when she wants. The only Wicked thing in this story is the witches that inhabit the Otherworld. And OK, the Queen does come off as a little nasty. However, other than a long kiss on the lips - with no tongue, mind you - there is zero sex in this book. Correction - zero things of a sexual nature in this book. Romantic things, like hand-holding and arm squeezing abound. Loving looks and hugs are all over the place, but this book definitely does not stray into heated territory.

I guess I’m a little perplexed as to why this is even in the romance category. The romance between Barbara and Liam has already occurred. They are firmly in love and just need to seal the deal in the Otherworld. They have already married in the Human realm. There is a bit of sadness at the thought that they cannot grow old at the same rate - but they are together with nothing impeding their love for one another. So definitely no classic romance obstacles here.

This is definitely a Quest type of story. A mini one for that matter, but a Quest nonetheless. The impossible tasks they set out to achieve each come with a riddle to solve - a thinking out of the box type of thing. The kind of thing an eleven or twelve year old reader might enjoy and be surprised by when they figure out the answer. And that solves the riddle of this book - it is a very chaste and sweet romantic story of a family being solidified that might appeal to a young teen audience or someone who likes simple tales and clean books.

At only 49 pages, Wickedly Ever After includes several introductory pages as well as a preview to the next installment in the series - all within said 49 pages! Instead of releasing these stories as Novellas, the narratives might be better served if they are joined and fleshed out into a thick and juicy Otherworldly tome of a story - an epic a reader could really sink their teeth into and get lost in.

This super short and sweet story gets a rating of 3.5 out of 5 stars.