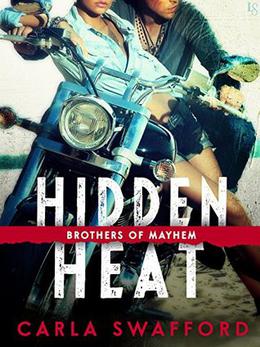 Cassidy is the reformed bad girl trying to get her baby brother out of the Brothers of Mayhem’s clutches. Her big mouth and baseball bat attacks get everyone’s attention and not all of that attention is good. Curvy, sassy and full of determination, Cassidy is the daughter of a former President (Skull) of Thorn’s club. She is the Princess of biker royalty - except that her father the King is in jail for murdering her mother in an alcohol and meth induced rage.

Sponsored links
Thorn is a badass cop, deep undercover in a corrupt 1% Motorcycle Club. He’s so deep undercover that he blurs the line of living the badass life. It’s sometimes hard to tell where the cop ends and where the fully-patched member begins. Thorn is hot on the edge of busting the whole Motorcycle Club wide open with all of their illegal smuggling and gun-running, not to mention killings and general mayhem.

From the very beginning of this novel, something seems off about the Brothers of Mayhem Motorcycle Club. Granted, most of my knowledge of the inner workings of MC’s come from reading romance novels about MC’s, so I base my knowledge on the research of past authors I have had the privilege of reading. This MC is described as a degenerate a one percenter group, though it’s a badly run one percenter club at that. With other MC’s, there is always an order, whether through respect or through fear - but there is a definite pecking order and rules of behavior that are supposed to be adhered to

While there is a President of the Brothers of Mayhem - a sadistic degenerate named Stonewall - he seems to be disrespected to a large degree. A greedy son-of-a-bitch his own members keenly dislike, Stonewall does not seem a man lethal enough to maintain the order that would be needed to run a club full of other equally violent reprobates. Cass’s sass and poorly controlled temper get her noticed by Stonewall - far too closely to be comfortable or safe for a lone attractive female. Stonewall gets more and more depraved whenever he encounters Cass. So Thorn saves her the only way a woman can be saved or have any protection around bikers. She has to have the protection of a strong man.

Thorn - tall, dark and blue-eyed, uses his long, lean muscles to carry a kicking and screaming Cass out of his bar and away from the lascivious looks and hands of his fellow MC members. From the moment he laid eyes on her, he was sucked into her ripe beauty and tough and tangy mouth. Cass will stop at nothing to get her brother away from these men of ill repute. Thorn, on the other hand, wants nothing more than to get his hands on Cass’s luscious curves - but that would go against his orders as a man of the law. No killing, no drugs and no sex while on assignment.

Only problem is, that even though Thorn the cop wants to keep Cass safe, Thorn the man wants her naked in his bed, badly. The kissing and fondling Thorn bestows publically on Cass to convince those around them that she is indeed his, is all too real and utterly arousing for the both of them. This is an area where the book really begins to shine. The exquisite sexual tension and attraction are five-alarm fires out of control!

The sex in this book really is as good as romance novel sex gets. Though it’s fairly run of the mill action, the descriptions and timing make their fucking and lovemaking a wonder to behold. Every time Thorn so much as looks at Cass, it’s panty changing time. And even better are the pangs of hunger mixed with the knowledge that they are both getting in deep - both are falling in love.

Cass is the first to admit it to herself, and while acknowledging the truth of her feelings, resigns herself to the heartfelt knowledge that girls like her don't end up with guys like Thorn. Guys who have manners, put a woman’s needs before their own and who show kindness to those less fortunate than themselves. Cass just knows that a future with a man like Thorn is not hers to have. Cass’s sexual experiences up to her tender age of 21 have been harsh and she owns up to her own role in their occurrence. But she is under no illusion that Thorn will behave any differently than any other man has - even if he is a cop. In Cass’s world, men want sex and experience sex as a means to an end: lust, power and control.

Cass feels she will never deserve anything better.

It’s therefore bittersweet when she decides to enjoy Thorn and hold onto whatever memories of her time with him that she can - as she truly believes she will never experience the kind of man he is in her lifetime again. The almost unconscious commentary on how women are often treated as sexual playthings by certain types of men is hard to overlook. It is actually sad that the reader can see the logic of Cass’s thinking, because unfortunately, a woman tainted by a promiscuous past IS often discounted as a suitable partner for ‘respectable’ gentlemen.

Overall, this installment of the Brothers of Mayhem MC is a fast paced, enjoyable book. There are a lot of twists and turns to the plot, most of which, I am glad to say, seem believable. There is also a lot of fist-fighting and familial love and rejection, but that keeps things interesting. Overall a good book to get your mind off of the daily grind. To find out what happens with Thorn and Cass once the Club is busted, well, you’ll just have to read the novel to see what kind of man Thorn turns out to be for Cass. I promise you won’t be disappointed.