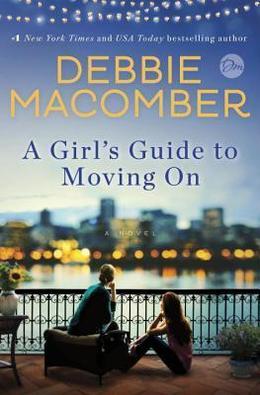 Nichole is a soon-to-be-divorced mother trying to find her way in the world after her country club lifestyle is shattered when she learns of her husband’s many affairs. Leanne is Nichole’s ex mother-in-law who loves her like a daughter. They divorce their cheating husbands at the same time, move into apartments across the hall from each other and spend two years figuring out who they are without their husbands - hence “A Girl’s Guide to Move On.” The guide the title refers to is more like a couple of goals the two make that they mention maybe three times throughout the whole novel. Calling any part of this book a ‘guide,’ in any case, is definitely ambitious.

Sponsored links
As for the characters… I hate them all, but surprisingly the ‘villains’ of the novel aren’t the worst in my eyes. Leanne’s ex-husband Sean is a huge asshole but he dies in the end so he gets redeemed by default. Nichole’s ex-husband, Jake, is a dick the whole way through until right at the end he magically grows as a character and becomes a good person. Nichole and Leanne are okay, if a bit tedious at times, but it’s their friends and love interests I despise the most.

Nichole’s storyline starts with her meeting Rocco, the hunky tattooed tow truck driver (a trope I can’t say I’m familiar with), and then paying for her tow by finding his daughter a dress for the dance. I’m not even going to touch the weirdness of that bit. Rocco turns out to be one great step for Nichole’s attempt to move on from her husband, and one huge step back for womankind. The whole premise makes me mad - he’s the typical “daughter no go out dressed like hooker” grumbling Neanderthal father we’re all familiar with from movies. It might even be fine if it stopped there (his daughter, after all, is only fifteen) but it goes so much further. He and his bulging muscles (which are described in great detail) treat Nichole like he’s the only one who wants to have sex and that he’s doing them both some huge favour by not giving in to his brutish desires. Give me a break!

Then there’s Nichole’s client-cum-friend Shawntelle. She, I believe, is meant to act as the comic relief by evoking the image of a sassy black woman. I’m very sure there are sassy black women out there, but why does essentially the only minority character in the book have to stink of stereotyping? I don’t even think it’s actually mentioned that she’s black, I’m just going off of her name and the way she is described. I guess that makes me a racist too. Thanks Debbie Macomber, your book has made me racist. Anyways, Shawntelle starts going on about how she met this guy and they’ve been out a few times but she hasn’t ‘given it up’ yet. She’s very proud of herself. I just don’t get this. Is this story set on some bizarre planet where it’s 2016 but women don’t enjoy sex? Like yeah, be plenty proud of yourself if you haven’t given up your social security number after a few dates. I wouldn’t give out your Netflix password until at least the fourth. If you want to have sex though, for the love of God just have some goddamn sex. You’re both adults. Jake, too, ends up in a new, happy, sexless relationship at the end. If you’re taking notes, what we’ve learned so far is that all black people are wonderfully sassy sidekicks and if you have sex in your loving relationship you’re doing something wrong.

And then there’s Nikolai. Oooooh, Nikolai. He’s Leanne’s love interest, a Ukrainian baker who attends the ESL class Leanne teaches. I find this ironic because his English never seems to improve. Nikolai seems to be two things; the kind of guy who would have protested women getting the vote, and the kind of guy who likes to stick his dick into loaves of bread. Perhaps at the same time. I think I’m supposed to think it’s cute that Nikolai bakes her bread every class and thinks of her ‘while I knead bread’ but I just don’t. Then he gets all pissy when she makes her ex-husband a sandwich with the bread, which then just leads into him getting pissy at her for absolutely everything she does. Finallyl he basically breaks up with her because she wants to spend time with her terminally ill ex-husband and the father of her child so that he doesn’t die sad and alone. I get that that might cause a strain in a relationship, but he acts like she belongs to him and because Sean lost ownership of her in the divorce he needs to never speak to her again. I had real hope for Leanne after Sean’s death. His final few months seemed to give her a lot of closure. After some time grieving she puts on her old lady pants and gets out there in the world, looking out for numero uno. Until she misses Nikolai, that is. I face-palmed. Leanne, you were doing so well! You don’t need him and his creepy bread!

There isn’t really a climax (pun definitely intended). Jake is a dick and then he stops being a dick. Then offstage Rocco and Nichole have sex. Presumably, anyways. She’s pregnant in the end but for all I know it could be an immaculate conception. Because nobody has sex. Because sex is bad. All this book did was make me angry and hungry. Angry because it’s frustrating watching these cardboard characters rattle through their dialogue without any interesting plot development. Hungry because there’s so much bread everywhere and it’s probably the only thing in the novel that gets a proper description. All in all I’d give it a ⅕ instead of a 0 because at least my rage kept me from falling asleep.