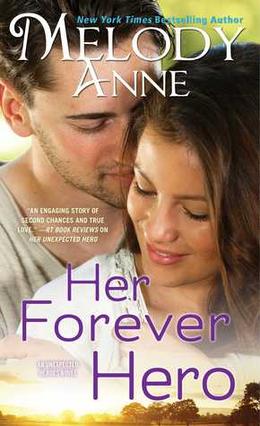 We all know that we’re not meant to judge a book by its cover, but in this instance I’m going to ask you potential readers not to judge a book by its name either. The title Her Forever Hero for me conjures up images of a pathetic damsel in distress waiting for her perfect Prince to scoop her up and whirl her back to his palace where they embrace until the sun sets. However, the plot, characters and sexual resonance of this novel is nothing like this, and in my opinion is far better.

Unlike most erotic novels, Melody Anne has managed to effortlessly (or so it seems) blend sensual scenes with a really nail-bitingly good thriller. Grace is being manipulated by an unknown individual, who is making it seem as though she is using a false business to fraudulently move money into offshore accounts. Despite claiming that she knows nothing about what is going on, the evidence starts to pile up against her. Camden Whitman, a hot and successful lawyer living in the same town in Montana as Grace is offered the chance to take up the case. It’s an offer this attorney simply can’t resist.

Yet, Camden’s desire to lend a helping hand to Grace isn’t entirely selfless, or a random case allocation. Him and Grace were each other’s’ first loves, and despite his wayward, short-lived sexual liaisons with other women, Grace is the only woman he’s ever loved, and the only person who has helped him achieve ecstasy in his orgasms. Camden well and truly wants and heeds her back in his life (and bed). The one problem? He shattered her heart and she’s still picking up the pieces.

Grace is determined to move away from her past through her own independence – she is not going to be a damsel in distress in need of rescuing, thank you very much! So why does the sight of Camden still leave her weak at the knees? Grace has bigger fish to fry however, in the form of her overbearing and downright awful mother. Our heroine wants to get away from the family heritage and prove herself along with her event planning business; the key problem is that her mother has such a wide-ranging influence over wealthy socialites in Montana that to cut her off completely could mean an end to Grace’s business.

Moreover, there’s something a lot more malicious than meets the eye going on in the southern country town. What seem like harmless pranks on Grace – moving furniture, a loose window panel and the suchlike – may in fact be a lot nastier than they initially seem. Grace is determined to ignore these however, hoping her mind is simply playing tricks on her whilst Cam gets increasingly concerned about her safety.

Let’s face it though, as readers we’re all a little glad that these things happened – as it means Cam gets to show us his sensitive side and attempt to persuade Grace to fall into his strong, loving arms. But, what is Grace frustratingly keeps denying his need to be with her? It might not only be her sexual desires she’s keeping at bay, but her wellbeing too!

Finally, we come to the serious part: ‘Her Forever Hero’ comes with a MASSIVE trigger warning from me. It does discuss an instance in which Grace is raped (don’t worry about too many detailed spoilers here, this is revealed pretty early on in the novel!), and there is one point at which the rape is actualised and described fairly graphically. The one plus side to this is that Grace’s rape is never excused as being in any way her fault, and we all as readers feel as much disgust for the perpetrator as he deserves.