Beyond Ruin (Beyond #7) by Kit Rocha 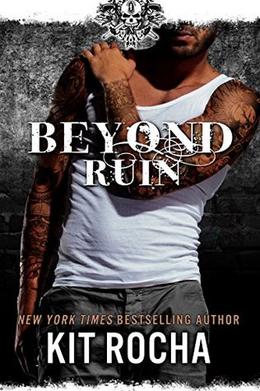 Beyond Ruin is the story of how two pairs of lovers, Jade and Scarlet, and Maddox and Dylan, come together in a dystopian world that is gearing up to go to war. I don’t know how I really feel about this book. To start, I feel like I’m missing out on something. This is, after all, the seventh novel in the series. I’m sure if you’re already a fan of the series it would be amazing, especially considering that it seems like the war has been broiling for a long time. From what I understand these characters were touched on in previous books and this is their chance for their own book. I missed the train, and I know that’s not the book’s fault but it does make it slightly less enjoyable.

Sponsored links
Maybe it’s just the fact that I don’t like dystopian novels. I really, really don’t like dystopian novels. Life is screwed up enough without throwing in a world that’s different enough from ours to necessitate explaining everything, but similar enough to make you feel uncomfortable. For me, reading a dystopian novel is like donning a skin that looks like mine but itches. Again, not really the fault of the book. There is one thing I will say though; the duo known as Kit Rocha have created a place (Sector 4) where anything can happen. Well, sexually at least. I like that. I like that all the taboos have already been swept out of the way, and we can just be like: “Yeah, that dude and that dude and that other dude are doing the do. Whatever, man.”

This, however, is also a problem. Why? Because foursomes are confusing. There are some great sex scenes in this novel, as apparently the O’Kanes (the tribe sort of thing they’re a part of) love crazy, wild uninhibited sex. Like hey, I don’t have a problem with that. But, when the four of them were having sex, I felt like I needed a diagram. Writing it must have been a nightmare. When you have four pairs of hands and legs, and you need to remember where each of them is at all times, I’m sure it can be more than a little challenging. Has anybody gone through this book and made sure that nobody grew a third hand? I feel like the authors must have screwed up somewhere. Nobody's that perfect.

The book is also missing one of my favourite parts of romance novels—the wooing. The leading male couple and the leading female couple are already bumping uglies at the beginning of the book. This is presumably what I missed out on in the earlier books. Yes, I get it: the two couples are the ones who are joining together. Still, I feel like because the two leading pairs arguably have way more interesting relationships than the four of them do together, I missed out on seeing the initial wooing. I’m all about the sexual tension; all about the sweet, sweet lovin’. Yeah, the sex scenes are great—if confusing—but the rest of the book is kind of angsty.

I know what you’re thinking: “There’s nothing wrong with a little angst!” And you’re right, a little angst is fine. The majorly deep seated issues of no less than four leading characters? I feel like I need a diagram for that too. I get that as the war approaches they have to fight internally between who they are now and what they left behind; especially as the O’Kanes seem to be a catch-all for the disenfranchised youth of the other sectors. Everyone is so broken and, while they’re finding what they need in each other, I still can’t help but feel like reading through this struggle is exhausting. I mean there are their personal struggles, their struggles in their relationships, and the external struggles of the upcoming conflict. That’s a lot of struggle. Ain’t nobody got time for that. It wouldn’t have been so overwhelming if there had only been two main characters, but there were of course four—as well as some random side plots. At this point I need a diagram as well as some sort of chart.

I know I’m making it seem like I hated this book but I actually didn’t. The writing was incredible. Even putting aside the amazing sex scenes (and seriously, they’re amazing) the rest of the writing drew me in as well. The way the authors describe things is descriptive but not flowery. Seriously, check this out:

'Her quiet confidence should have soothed him. It did, but it also left him feeling out of sorts, because she didn't understand the truth. None of them did.
The reason he was so damn good at healing was because he knew every possible way to inflict injury. He knew every pressure point, every weak spot, every unpleasant sensation that could make someone beg for mercy. He'd been trained as well as any of Eden's soldiers, only his battleground was the human body, and his weapon was knowledge,'

That actually gave me shivers. Anyways, all in all I’d probably assign this book a ⅗. I bet it would even be more if I had read the rest of the series. And remember: keep an eye out for that extra hand. It’s gotta be somewhere.