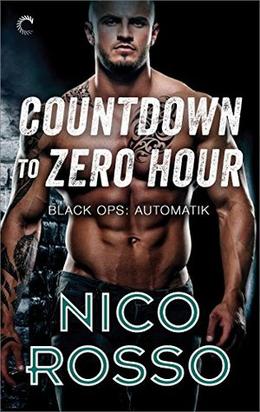 First of all, any book that I have to take into the shower with me is a good book. I don’t know if you’ve ever stood under a cold shower stream, trying to protect your phone while also trying to finish the chapter you’re on, but it’s an adventure – much like Countdown to Zero Hour.

Sponsored links
The first thing you’re introduced to in Countdown is the food, which is appropriate as it plays a huge role. The food becomes an integral part of Nico Russo’s settings, giving them the life and reality that really stuck with me throughout the book. The second introduction is to Hayley, who is probably one of the strongest romance heroines that I’ve ever encountered. It was really nice to read a book where the heroine didn’t wait to be rescued – she was in the fight, ready to defend herself and her food from the get-go. I’m not a damsel-in-distress kind of girl, so I was right there with Hayley and her weaponized spoon.

I’ll be honest, when I first picked up Countdown to Zero Hour, I was a little hesitant. Men in uniform aren’t usually my gig, but from the second that Art showed up, I was enamored. Maybe it was the way he was immediately introduced as a complex character, or maybe it was just the fact that he was dangerous (dangerously sexy!) and mysterious, but I was immediately invested in the character. As the book progressed, I fell more in love with Art and his protective nature, the way that he tried to keep the job and Hayley in mind. It helped that he has a devastating sense of humor and a little bit of darkness around the edges – swoon!

The writing itself was well-paced and exciting. The action sequences left me on the edge of my seat, but my favorite part of Countdown, by far, was the slow burn romance between Art and Hayley. They were both aware of each other and their desire, but Russo chose to let it build between them before sending them to bed together. This was a wise choice – it kept me just as on-edge as the action scenes, made me want more, and convinced me to keep reading well into the night. I didn’t even regret it at work the next morning, because I was still wrapped up in the world that Russo created.

I would have liked to see more of the Automatik team – a little more introduction to the characters involved beyond just fringe characters. Perhaps that’s my wish for more story, as I really didn’t want this one to end. I wanted them to keep fighting mafia bad guys until the cows came home. I did feel like the ending was a little rushed, but that could have been the fast pace inherent to action scenes. Overall, I thoroughly enjoyed Countdown to Zero Hour, and plan to pick up more of Russo’s work!