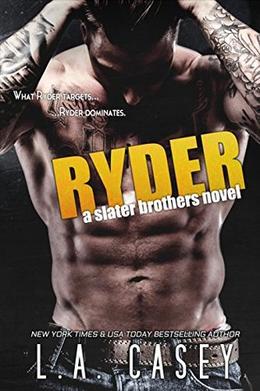 This book made me feel violent in so many ways. The premise is this: Branna and Ryder, a couple that has been together for the previous books in this series, are having a rough time in their relationship. Ryder has been distant, and often leaves at night. He won’t tell Branna where exactly he’s going, and gets mad anytime she’s upset about it. Branna makes the decision that she needs to leave Ryder, and thus begins his journey to prove his intentions were good and get the love of his life back.

Sponsored links
I started reading with high hopes. I mean, the cover alone is enough to make a lady tingly. But it’s so depressing, watching these two people interact with each other, so mired in the dregs of their relationship. When I read that they had been in this rut for a year I couldn’t believe it. A year? Of him treating her like crap and her doing basically shit all about it? I couldn’t stand it after a few pages—how the hell did she go a year?  Yes, I get that Ryder is up to something that he has to keep hidden from Branna. But he won’t tell her anything, he disappears without a word in the middle of the night, and money from their joint account has disappeared. Honey, these are what we in the business call red flags. And by the business, I simply mean the business of not getting screwed over by your asshole boyfriend.

Part of the story is told in flashbacks, which at first is great. Mostly because the first flashback is the story of how the two met, and it is filthy as all hell. At times it got a little too filthy though? I’m certainly not a prude, but his brothers were around, and they were saying things that would just make me feel really uncomfortable if I was literally any of the people in that scenario. But whatever. That’s their jam.

Most of the time in the present, though, I was just varying degrees of pissed off. Not only did Ryder’s dickish actions annoy me, but Branna frustrated me too—maybe even more so. She’s so unhappy. So unhappy. But she moans about it more than she actually does anything about it. And then Ash pops in, her friend and coworker who happens to be a dreamy foreign guy, and I was definitely ready for that to happen. But of course that can’t happen, because the book is called Ryder, not Ash.

There’s a point in the book where Branna is faced with a situation she might not make it out from, and she’s a little bit relieved. The woman is actually relieved that she might get the opportunity to die so she won’t have to continue living in her pained existence. I get that that can happen in a rough breakup where there are still strong, passionate feelings. But at the beginning of the novel she says she already fell out of love with Ryder long ago. Yes, that doesn’t mean it should be easy for her, but that also means that it shouldn’t be quite that hard. You’ve already spent half of the book crying about it, love. Might be time to move on from your dickhead man-child.

But wait! He’s actually not a jerk! Really he’s been doing acting like that because he’s been up to something that he absolutely has to do. So it’s okay for him to treat his fiancee like crap, right? Wrong. Take your time if you’ve got to take your time, get your ducks in a row, do whatever you need to do to save your family. But absolutely, under no circumstances, is it then okay for you to have a fight with your SO in which attack her over not having sex with you anymore. Are you for real, man? You’ve been pushing her away on purpose, but you expect her to pretend like nothing is wrong? A relationship is not like a cactus. You can’t just throw a little water at it once every blue moon and then gloat over how you’re a master gardener because it didn’t die. A relationship is an orchid, which is bloody hard to maintain and that’s why not everyone and their dog has one.

The denouement feels a little forced, too. I would have liked to see Ryder struggle a little more, prove himself a little more, but he gets basically a free pass because he’s so hot that he apparently literally melts brains. Yes Branna, your relief at having your sexy American reaffirm his love for you is palpable and we’re all very excited. But who’s to say he won’t pull this crap again a year down the road? Ten?

I give this book a ⅗. There are lots of good elements to it, and it made me chuckle in lots of places, but I spent the whole book actively dreading their reunion, instead of craving it.