The Study of Seduction (Sinful Suitors #2) by Sabrina Jeffries 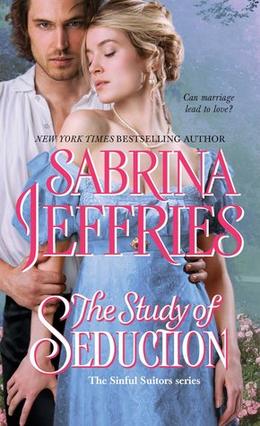 I’m of the opinion that if someone tells me they like Regency era romance novels and they are not familiar with Sabrina Jeffries, they’re simply doing it wrong. Jeffries is a master of the era; attention to detail is insane, dialogue is wonderful, and the characters are so tangible they almost breath for me. Study of Seduction is no different.

Sponsored links
Edwin and Clarissa are our beloved couple in this one. Edwin is the Earl of Blakeborough and is kind of known for being a bit serious. Not rudely serious, but someone who is more at home in his workshop making automatons (his beloved hobby) than hob nobbing at some soiree with the who’s who of London. He appears exasperated with the formality of society, which he clearly reads as a fake game. However, his best friend needs his help. While best friend is off on a very serious family mission, best friend needs Edwin to mind Clarissa as she rotates her way through the season.

However, this is not a simple issue of Clarissa being a bit flighty or naive. On the contrary, we are given the impression that if Clarissa were born of a time where chaperones were only for primary school field trips and not dates, she would do just fine. The real problem is she has picked up a rather persistent suitor, a French diplomat who appears to be allergic to the concept of ‘no’.

Which, besides the stalking aspect of it all, is an issue for Clarissa. You see, she has vowed to never marry. She has, for reasons known only to herself for most of the book, decided that she has no interest in men. When presented with a choice between Creepy Stalker Dude and Serious Edwin, she begrudgingly makes the wise choice and marries Edwin. This is done to supposedly protect Edwin from blackmail, but the plot gets a bit more complicated from there. And doesn’t it always when humans are involved?

I absolutely adored this book. I was wrapped in it from beginning to end. It’s the second in a series and I didn’t feel lost at all. There were a few wee moments where it was clear there were other stories happening, but only at the beginning, and it was presented in such a way that I was not confused.

As a social worker who has worked with survivors of sexual violence, I was also really impressed with how this story handled an aspect of that world. A bit of a spoiler here, so look away if you’re averse to such things. Clarissa is afraid of marriage because she is afraid of sex. It appears that when she was in the beginnings of her society debut, she was trapped in an orangery and raped by a son of a earl of something. The experience was so traumatic that she has rarely spoken of it since, and therefore assumes that all sex is painful and even shameful. She blames herself for the attack, thinking that it was her fault for being in the orangery in the first place.

When she and Edwin finally talk about it, it reads like so many other survivors. It’s so easy for them to believe they are to blame, and talking about it with others who remove stigma and provide healing is so crucial. It behooves me to say this: rape is never the fault of the victim/survivor. Ever.

Between the deft dealing of that issue, the swoony love story between Clarissa and Edwin that unfolds as they learn to trust each other, and the delightful period details Jeffries always nails, Study of Seduction is a must read for any Regency fan.