The Billionaire's Touch (The Sinclairs #3) by J.S. Scott 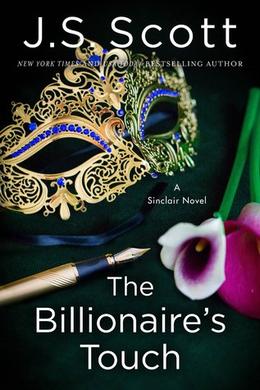 I have to say I really did dig the concept of this book. Randi is a small town teacher who reaches out via email to the billionaire Sinclair family when her town’s Christmas fund gets stolen. That’s not the part of the concept that I liked. In fact, that was the part that made me want to stop reading the book. Like the whole ‘needing a Christmas miracle’ thing was really milked out, and it was pretty tedious reading through the process of her writing the email. Has she never heard of contacting the media? Starting a GoFundMe page? Basically doing anything but emailing this random family hoping they’ll read her email and not automatically assume (as I would) that she had simply rebranded the whole Nigerian prince email scam? (Yes, those do still exist. I get them at work all the time.) Luckily for everyone, the problem gets solved by her friend Emily in a different novel in the series, so we get to flash forward through all the yuletide warm fuzzies.

Sponsored links
What happened to that email then? Months after it was sent, Evan Sinclair comes across it and makes a snarky reply because he apparently has nothing better to do with his day. He even goes through the effort of making up an anonymous email address to do so. Somehow, this is the point where I found I was inexplicably entranced. I spent the rest of the book wavering between “I can’t put this down” and “This is the worst piece of trash I’ve ever read.” Does that sound confusing to you? Welcome to my life right now.

Okay, so after the pair have been talking anonymously for over a year, Evan comes to her town to visit family. They’ve met before, apparently, at a couple of weddings, and they’ve both made it clear they hold they other in discontempt. This made it all the more confusing for me when Evan insisted on walking her to her car, then cleared all of the snow off of it for her, before laying a truly hot kiss on her. Let me remind you: they don’t know that they’re each other’s secret pen pals yet!

So why is Evan tripping over himself to help her out? Why does he then make a big fuss about ensuring she has enough food to make it through the impending snow storm? I don’t know, man. Yet here I am, blasting through this novel because I’m completely enraptured.

I loved that they already liked each other and had a connection, but didn’t know yet. Since I knew they had to find out one way or another, the suspense kept me on my toes. The sexual tension in the meantime was titillating. The couple clearly share a certain electricity, which made me forget my grumblings about the initial weirdness as soon as things started getting steamy. Oh, and how steamy they got. J.S. Scott clearly knows how to structure a sex scene. They weren’t always perfect, but they were certainly good enough to keep me interested.

Unfortunately, most of the writing left a lot to be desired. First of all, there was a lot of repetition. Though that is to be expected in novel writing, it was a bit heavy-handed. Scott seems to prefer to tell instead of show, which at times makes it feel like she’s grabbing your hand and wrenching you through the story. The emotional scenes were sometimes okay, and other times rose up out of the blue like a giant, wailing sea monster. I’d be reading along, chilling out, then suddenly someone was crying. What?

Then there’s the clunky-ness of the writing:

“I need this, Evan. Please. This doesn’t have to mean that I like you, or that I expect anything. You don’t have to like me, either, in the future. But I want this now.”

“He stroked her hair like she was special to him…”

Those are only two of many times when I read a section and was completely pulled out of the mood. Then there’s the fact that Evan seems to always whisper huskily (I swear to god that word is used at least fifty times), and Randi’s two favourite phrases seem to be “I need you” and “Evan please.” After I started noticing these things I found it hard not to get distracted every time I saw them, which was a lot. It got to the point where by the time I reached the end I could basically have predicted exactly how each exchange would go.

Nonetheless, I still devoured the book. I find that, oftentimes, the writing is much less important than the actual story. It’s a difficult fact to reconcile with as someone who enjoys good prose, but that’s life. For the story and the exquisite sexual tension, I give this book ⅘ stars.