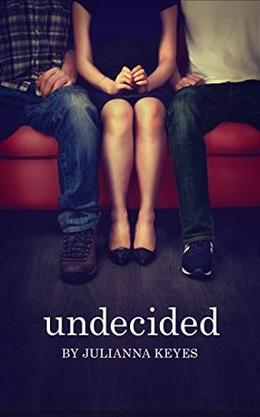 So I get this book and I see the cover and I see the title and I think, “oh, okay. New Adult menage book.” I read the first few chapters and I remain convinced that’s where this thing is going. Imagine my surprise when that was not this book’s direction at all! Instead of a love triangle or a sex triangle or any level of a triangle, Undecided is a delightful book about two college folks learning who they are, who they want to be, and how they can help each other get there.

Sponsored links
Nora faces a story not unique for college folks. She was a certain person in high school and decided that her freshman year would be the time to become someone completely different. The pendulum swung a tad too far, however, and she ended up getting arrested for streaking down the main street of their town. Failing a few courses along the way had a problematic effect on her academic scholarship as well, so Nora commits to sophomore year being all work and no play.

She answers an advertisement for a studious roommate and is shocked to find out that the advertiser is actually one of the biggest names on campus, Kellan. Who she also happened to hook up with at a party the year before wearing a bright red corset and little else. And who also happens to not remember her whatsoever. So that’s delightful.

Also at the interview is Kellan’s best friend, Crosbie, who is another lad with a bit of a reputation. His varied sexual conquests refer to themselves as Crosbabes, so hopefully the image is pretty vivid for you there.

Nora has a crush on Kellan, who is described as their college’s answer to Zac Efron, so not sure who wouldn’t have a crush on the dude, but begins to feel a strange attraction and pull towards Crosbie after she moves into Kellan’s apartment. See where I thought this was going?

But no, turns out Kellan is a bit like a cotton candy human: enticing and delicious and fun occasionally, but no substance or commitment and is essentially only the illusion of food. He’s generally a good dude, but immature and has a long way to go in himself before he’s ready to have any commitment in any relationship, even one with his mates.

Crosbie, on the other hand, uses his immediate attraction to Nora (which we’re told about much later) as a catapult towards adulthood and stability. Choosing to be with Nora at every opportunity instead of with a random sexual moment, Crosbie shows up for Nora again and again and again. When they finally hook up, the mind blowing sex is built on trust and respect.

There’s some well realized college situations, where there is drama but little manufactured angst. There’s a lot with Nora’s family and realizing a lot of her behavioral patterns are products of those her parents made, so she chooses new patterns on her journey to define herself. There are friend falling-outs and reconciliations, fear over midterms and classes they blow off. It’s a wonderful New Adult novel - authentic to the life period of these characters without creating more drama than it already inherently contains. And praise be to the living God, there is no rape. All sexual contact in this story is consensual and it’s so refreshing to read a story where someone is grappling with sex that they consented to. Nora is ashamed of her past self and the number of men she was with by her own choosing, Crosbie seeks to eliminate his reputation as a player, while Kellan handles things differently. The contrast between the three of them is both arresting and authentic and I appreciated it greatly.

Overall, this is absolutely recommended for anyone who is a fan of NA as a genre, but I’d also recommend it for those who are scared to dip their toe into it. As I said above, it’s all the best parts of the genre, without some of the things that make me throw NA books across the room.