Thrown Down (Made in Jersey #2) by Tessa Bailey 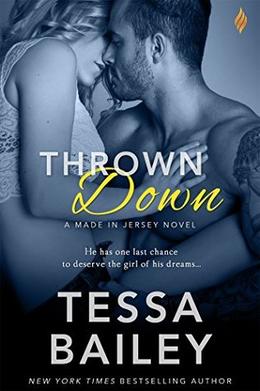 I was on a family vacation when this book pinged its way into my email. We had just spent a few hours climbing all over some Mayan ruins in Costa Maya, Mexico in about four thousand percent humidity and the bus ride back to our cruise ship was planned nap time for the rest of my family. River and Vaughn wouldn’t let me nap.

Sponsored links
As we zipped through the countryside, I found myself transported to a working class town somewhere in New Jersey, down on its luck and desperate for a gasp of hope. Vaughn and River grew up together and were completely in love in high school. It was a controversial love; River’s family had her bound for college and on the way out of town forever, and Vaughn was seen as the dude from the literal wrong side of the tracks who was holding her back. Unfortunately, he was a bit of a self-fulfilling prophecy, especially when he beat the hell out of town, leaving her high and dry to join the army.

Now, unbeknownst to him, one of their last nights together produced a baby. A baby that River has been keeping secret from Vaughn for the last several years. So, if you’re averse to the secret-baby trope (and I know you are legion, it seems to be a less and less popular trope as time goes on), then you may want to give this a pass. However, it’s a completely plausible secret baby as Vaughn made it pretty hard to get in touch with him and responded to contact very rarely. Additionally, there’s not a lot of “woe is me” attitude from River, which often accompanies this trope. All together, I’d say this is one of the best examples of this type of story.

When I said at the beginning of this review that River and Vaughn wouldn’t let me nap, it’s because I could feel their love, pain, and angst from the pages. These two folks clearly love each other, clearly want to do life together, but River is so scared and so wounded by Vaughn’s choices that she can’t quite see past that. The more he shows her that he has grown up and is willing to make new choices, the more her layers of pain start to melt, and the more these two begin to find each other again.

Plus, let’s call a spade a spade here, the sex is hot.

Contemporary romance, as a genre, is full of stories of small towns, but there’s not quite as many about small towns with serious financial issues. It was different and kind of refreshing to read about people who are not making certain choices because they’re petty, but because they literally have no other option. River works at the local factory, which is bought out while our story takes place. There’s a palpable fear about what the new owner will do. In the time frame of the book, he makes enough improvements that the factory stays open, but it would also not surprise me if there’s a wrinkle about that in the next book of the series.

This is also a great example of a series where it really can be read in any order. It takes skill to make me feel like I know a world and can navigate it, even when coming in at book two.

I’d recommend this one to anyone who is a fan of books with second chances, compelling characters, and a sweet happily ever after.