Edge of Temptation (The Edge #2) by Megan Crane 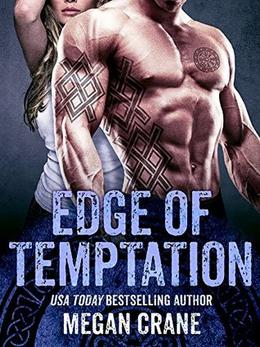 Right off the bat, I was excited for this book. I was willing to look past the fact that the dude’s tattoos on the front cover are such a poor show of Photoshop that it looks like the graphic designer may have just been taking the piss. Why, you ask? Because that, my friends, is a Vegvisir on that man’s bulging pectoral. I hadn’t read the description for the book, but already I had hopes that there would be some crazy Viking shit involved. That’s my jam.

Sponsored links
For those who don’t know, the Vegvisir is an Icelandic Viking rune that is meant to protect the bearer from ever becoming lost. Bjork has one, though I think we can all agree she got a little lost with that whole “swan dress” fiasco in 2001. But I digress.

Not two pages in and my hopes were dashed. Shit. My old enemy—Dystopian fiction.

The story is set in a world where the Storms have ravaged the cities, forcing everyone back essentially into the dark ages. It’s the tale of a raider, Gunnar, who needs to find a virgin to sacrifice in order to bring back his dead mate. Maud is a nun-on-the-run who asks to go with him (before realizing that he wants to kill her) in order to escape her creepy, messed up church. The two share a palpable energy from the get-go, and they get up to all sorts of kinky shenanigans before Gunnar has to decide whether his old mate is worth killing his new lady for.

I understand that there are lots of people who like dystopian novels, but I am not one of them. I like to know what to expect, what the rules are. I’m anxious like that. Nonetheless, I can honestly say that I enjoyed this novel.   First, there were lots of Viking parallels to keep me entertained. The male lead’s name is Gunnar, for a start. He and his raider buds cruise around on ships, attack cities, and steal things. They’re dystopian Vikings, essentially.   Second, Maud makes me smile. She’s sassy, confident, and has an air of calm about her. She seems like the perfect pairing for the rugged, brooding, full-of-anger Gunnar. I liked that when she first meets him, she knows that she should be scared, but isn’t. She’s had a rough go of it, so seeing her find some peace in her crazy world kept me interested. Gunnar, too, is a well-developed and well-rounded character. In fact, there are lots of colourful characters inside the pages of this book. I mean, most of them grimy assholes, but they’re colourful grimy assholes, and that’s what matters.  Third, the writing was superb. It was a bit verbose in parts, but overall I thought it was engaging and thoughtful. You might think that reading about a blowjob for nearly a whole chapter would begin to get tedious, but somehow the authoress kept the randyness fresh.

Unfortunately, the whole world that Megan Crane has created creeps me the hell out. Not only is the church completely disgusting, but the cities seem like wretched places too. Lots of people like that, I realize. There’s a huge market for novels set in worlds that are a perverted version of our own. There’s absolutely nothing wrong with that, and I think everyone should read what they like to read and be happy. But I am not one of the people that feels comfortable in dystopia, so when Maud was describing the role of nuns in the church, and Gunnar was educating her on proper city etiquette, it made me feel just the teansiest bit sick inside.   In the end, I’m a bit torn. Yes, all of the good things that I mentioned made reading it interesting. Unfortunately, the downsides influenced my opinion almost equally. Almost. The positives won out in the end, for me, because I’m trying this new thing where I go out of my comfort zone. Usually this involves pushing myself a little harder at the gym, but hey, why not throw in a few sexy post-apocalyptic novels every once in awhile?