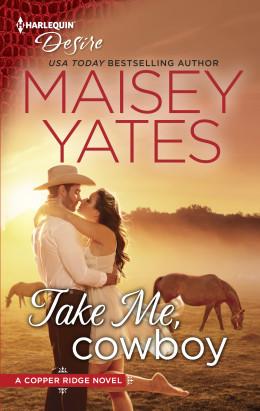 You know you’ve read a good book when upon reaching the end you exclaim out loud “is that it?!” I was not finished with Chase and Anna when this book was done, because even in the short space of this book (it’s a Harlequin Desire book, so category length) I completely fell for these two.

Sponsored links
Take Me, Cowboy is the story of two folks who have been best friends for most of their lives. Chase is the town playboy and Anna is the town misfit who recently started her own business as a large equipment mechanic. Anna’s mom left the family behind when Anna was a kid, so lady influences in her life were slim to none. More at home with monkey wrenches than high heels, Anna’s not exactly made her way into the dating scene. Our story kicks off when Anna’s brother bets her that she can’t get a date to an upcoming charity gala ball thing and she takes him up on it.

Not having any idea what to do about it, she moans to her best friend who comes up with a solution: they should fake date until the gala.

Well, chickens, we know exactly how that’s going to turn out, don’t we!

Of course they live happily ever after, and since this is a Desire line book, the sex is super hot on the way there. What sets this book above other Desires for me is the emotional content author Maisey Yates packs in there. While there are certain confines she certainly has to work within, the pacing is still believable and appropriate, the disclosures are authentic, and the ending absolutely perfect.

Anna is strong and sassy, and with the comfort of knowing Chase so well on many levels but not all, we see both that confidence and the shakiness that comes from new layers in relationships. She knows this man, but she doesn’t know this part of this man. She’s used to taking care of her own sexual needs and not opening herself up to the intimacy that comes with partnering. For a lady who prides herself on being self-sufficient, Anna quickly finds herself craving the space that’s created in a relationship. That shift is unexpected for our Anna, and a lesser author would have ignored it. Instead, Yates sits in Anna’s discomfort and confusion for just a little bit, just enough time to allow us to believe that the choice she makes to move towards Chase instead of away from him is authentic.

As for Chase, his particular baggage is currently being dealt with via his penis. He and his brother are working to reinvigorate the family business, which languished a bit after the untimely death of their parents. (Side note: I hope brother Sam gets his own book soon…) He carries some significant shame around the death of his parents and has to deal with that. What I love, however, is that he deals with it with his brother first. I like that Anna is not his whole world and the only one who holds his soul; he’s still part of a family. It just struck me as so real.

Overall, this book is small but mighty. A fantastic introduction to category romances for anyone who has shyed away from them - this is a contemporary romance like any other, just a touch shorter, but with no trade off on character development. Highly recommended for anyone who likes their heroines sassy, their heroes strong, and the descriptions of orgasms lengthy.