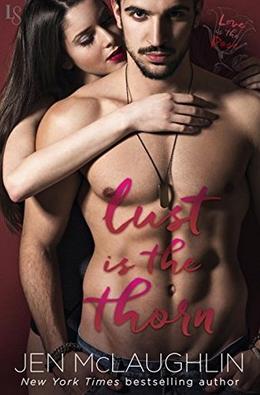 The premise of this book made me go “erhmmm”, readers, so I was not anticipating enjoying this one. Thorn is a Catholic seminary student, a hair’s breadth away from taking his vows to enter the priesthood. The book opens with Thorn being summoned to an emergency room since his childhood friend, Rose, has listed him as her emergency contact. The back copy tells us that Rose is the one thing keeping him from making his vows, so I was wary.

Sponsored links
In my professional life, I’m a social scientist who researches religion, faith, and how they motivate people’s lives. I cannot tell you the amount of times I’ve read something hackneyed and borderline offensive about the treatment of people’s faith simply to advance a plot. I’m also professionally aware that the Catholic Church is in a priest supply crisis. The seminary in Ireland, for example, which used to graduate hundreds of priests per year is down to single digits in most graduating classes. It was hard to tell from the first bit of this book why Thorn was even in the seminary and I was nervous.

A lot of that nervousness was abated by the character of Father John, who is Thorn’s mentor in seminary. Father John is very aware of Thorn’s feelings about Rose and his ties to her. The conversations they have about this were lovely. Father John essentially said that Thorn has to decide which covenant he wants to make - a vow to service of the church or a vow of love to Rose. I can only imagine how many priests since the 1100s (when the Catholic Church forbade priests to get married) have had to make that choice. The resolution of that decision was inevitable if this was to be called a romance, but the author did the work necessary for me to believe the choice was gut-wrenching and difficult for both of them.

The ties between Rose and Thorn run through Mikey - Rose’s brother and Thorn’s best friend who died several years prior in a tragic accident. There’s a spoiler alert surrounding that, so I won’t get into it, but that dynamic is the other driver of this story. It appears that Mikey and Thorn were not exactly upstanding citizens and the events of Mikey’s death is what propelled Thorn towards the priesthood.

I’ll be honest though, I never got the impression that Thorn had any desire to really serve the church. Instead, he has a reformed desire to serve humanity. That difference is crucial and left slightly unexplored. That would have been a more fascinating book to me, personally, than the one we ended up getting.

However, I’m aware that for most readers, the connection between the two main characters and the descriptions of both their emotional and sexual connections are what drive a story home for them. On that front, this book is solid. It strays into melodrama a few too many times for my personal taste, but I know a few of you would just revel in it. The sexual chemistry is off the charts and her descriptions of their sexual adventures is nuts. If you’re in the bag for friends-to-lovers who have to overcome a lot of past baggage to get there, then you should absolutely give this one a go.

Overall, a solid book that did not tick all of my personal boxes but was well written and enjoyable nonetheless.