Only Beloved (The Survivors' Club #7) by Mary Balogh 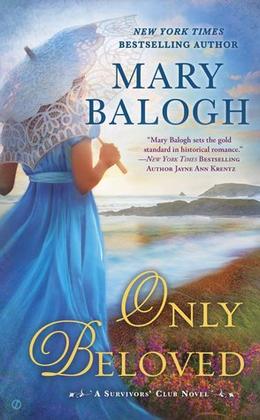 Mary Balogh is one of the most reliable historical romance writers active today. That doesn’t mean she’s boring, or predictable in a stale way. It means that if her name is on the cover a novel, you know that novel will be rich with period details and involve two main characters who are, at the core, good people. Those characters will be gorgeously written and delightfully portrayed. Their dialogue isn’t going to make you laugh out loud, but it will make you smile, and feel content in a gentle and lovely way.

Sponsored links
Only Beloved is absolutely no exception to that rule. The conclusion to the long-running and much beloved “Survivor’s Club” series, Only Beloved is about George, the Duke of Stanbrook, and Dora, a spinster music teacher we briefly met in a previous book. It picks up very closely to where the previous book left off, with the wedding of Survivor’s Club member Imogen and finds George with an empty house. Upon reflection of his life and his own sense of self, he decides he is tired of the “widower” title and sets out to ask Dora, whom he met as briefly as we did to be frank, to be his wife.

Dora, for her measure, is shocked to find a duke on her doorstep, much less on her doorstep proposing marriage! But choosing to be brave and adventurous and even a touch selfish for once in her life, she accepts. What ensues is a story of two adults who have learned how to do life quite on their own, learning to do it together. And when I say adults, I mean that. George is in his late 40s and Dora in her late 30s when this story takes place. I read very few romances that are about folks in that generation bracket that this was refreshing.

For anyone not familiar with the Survivor’s Club concept, I will explain. Allow me to first say that all the books in this series are able to be read at standalones. Balogh does the work necessary to make sure that everyone has a way into this world she’s created, either from memory or explanation. However, I will say that having read all of the novels, the payoff at the end of this book, where they all get together, is lovely. I appreciate how she wrapped up that world so that we know they all are truly living happily ever after.

But! For those who are new, the Survivor’s Club is seven characters who were all affected by the Napoleonic Wars. They lost in that war; spouses, children, limbs, peace of mind. George opened up his ancestral home in Cornwall for a hospital during the wars. While hundreds of folks cycled through there, it was the seven these stories pertain to that remained. We learned all of their other stories and I, for one, was glad George got a go at happiness as well.

There’s not a lot of swooning in this book. Dora’s choice to marry George is as much practicality as love at the beginning. Of course, the romance grows as they grow closer and more intimate with each other, but even their wedding day is not picture perfect. There is a bit of suspense as some old family drama comes back to haunt George and Dora gets caught up in it, but it is all resolved in the end. Additionally, while the sexual chemistry is delightful, it is the emotional unveiling of himself that makes me completely fall for George as our hero. To watch him choose vulnerability for the first time in his life and to see that choice rewarded with Dora’s love… I sighed with contentment and happiness for them.

Only Beloved, like the six books before it in this series, is a must-get for any fan of historical romance.