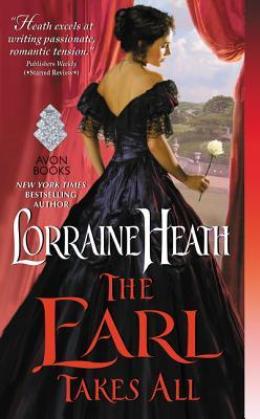 I’ve been on such a contemporary fiction kick lately that this regency treat by Lorraine Heath was a complete breath of fresh air. The second in a series, The Earl Takes It All tells us the tale of Edward and Julia, with Albert and an unborn child complicating matters. Edward has had a thing for Julia for a donkey’s age, Julia can’t stand Edward and thinks he’s a total miscreant. Why does this matter? Julia is married to Edward’s twin, Albert, the Earl of Greyling.

Sponsored links
Why does this really matter? Albert dies in Chapter One, except that Julia thinks it’s Edward who died because Edward comes back from a trip the brothers were on in Africa pretending to be his brother. Telenovela level malarkey we have going on here, folks. Julia is about seven months along with the presumptive heir of Greyling and has evidently miscarried several times before. The brothers are wholly concerned with the health of the baby and so the decision is made to impersonate the Earl until the baby is born.

You can imagine just how well Julia takes it when she finds out.

This is one of those rare regency romances where I wasn’t 100% sure exactly how this thing would turn out. The conflict was both internal and external and while I was sure the internal would get resolved, I couldn’t really see how the external would sort itself. This is getting a bit into spoiler territory, so if you want to remain pure, let me fast forward to my conclusion and then you can click away: this book is charming, Heath is a master, and I would highly recommend this one.

Now, to get into spoilery territory. As I said above, Edward has loved Julia since before she married his twin. His was of coping with that was to be a complete and utter asswipe to her, in hopes that she would refuse to be around him. It largely worked, until his twin died and asked Edward to live with Julia as man and wife. The first, I’d say half, of the book, we are in on the secret but Julia is not. She’s mystified by some of the changes in her husband, but chalks them up to time apart and the massive life change of a safari in Africa followed by the death of his twin. Once she finds out the truth, she starts to piece things back together.

She realizes that she probably always loved Edward. He was, personality wise, far more matched to both be her partner and the Earl, but Albert was born first so that’s that. As she wrestles with these feelings, there’s the pesky issue of the fact that everyone thinks that Edward is Albert and that Edward is dead. Because she bore a daughter, there is no heir except Edward who is “dead” and… it’s a just a fecking mess.

At the point this story takes place, English law declares that a man cannot marry his brother’s widow. They’re all distraught by this, but then discover that they’re not the first couple in this situation. Travel to Switzerland, they’re told, where the laws are more relaxed. Once they’re married there, England has to recognize the marriage and they can resume life here. No big deal. And that’s what they do and that’s how the external conflict is resolved.

Now, my 21st century sensibilities went a little squidgy at this. And then I realized that I was being silly. Love is fluid and private and magic and Edward and Julia clearly have it. Their emotional, sexual (oooooo boyyyyyy), and parenting chemistry is fully on point and I buy this couple completely.

I really loved this book and read it in one sitting. I would recommend it to anyone who is generally in the bag for regency as a subgenre, but especially for anyone who likes unique plot lines. I’m normally annoyed by secrets in plots, but this one was handled deftly and felt more like suspense than a cheap plot device. Overall, as I said, highly recommended.