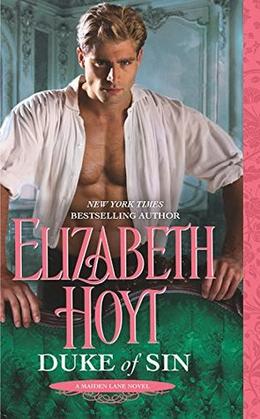 Oh my gosh. I won’t even build any suspense about my verdict here, ladies and gents. Not only was this my favourite book that I’ve reviewed, but it might just be one of my favourite books of all time. First off, the author dedicated the book to everyone who ever fell hopelessly in love with the villain.  Yes, hello. My name is Danielle, and I have a problem. I fall for every villain ever. Sean Bean need only give me a sidelong glance and I’d be lost. I was actively rooting for the dude who cries blood in Casino Royale.

Sponsored links
Turns out there’s a book dedicated to me.   After reading that caveat I was unable to put the book down. Until I had to go to boxing, that is, where I thought only about the book as I did endless burpees and skipping, then went straight back to the book until I finished. This is not something that often happens to me.

Duke of Sin is about the Duke of Montgomery, Val for short, and his housekeeper, Bridget Crumb. He’s an avid blackmailer, and she enters his household in order to find the material he has on someone close-ish to her. Right from the beginning the Duke is fascinated with Bridget, and she’s fascinated with the man underneath the madness.

And oh, is there ever madness. Val is a narcissist who loves hanging out in the nude and doesn’t care who sees it. He’s prone to poetic soliloquies and wears this, and all his other eccentricities, as an impenetrable suit of armour. Bridget doesn’t have time to put up with his crap, and digs straight to the heart of him. It takes awhile, of course (suit of armour and all), but that’s what makes this novel so good. Well, one of the things, anyway. There’s a fierce tension between the two, and so many occasions in which their conflicting moralities come to a head and cause sparks to sail about the place like demented lightening bugs.   Like I said, that’s only one of the things that makes this novel great. The writing is everything you could want from a romance author. It doesn’t detract from the story by placing too much emphasis on prose or style, but it’s lively, engaging, and truly beautiful in some places. The main characters are both interesting and full of life. I could actually believe that they’re real people. Yes, Val is so out there at times that you wonder if he could truly be real, but that’s the point of him. Even Bridget wonders that sometimes.

Bridget, even when she’s in way too deep with Val and she knows it, doesn’t sacrifice what she considers to be true and right. It’s not like she’s stubborn for the sake of being stubborn, either. Sometimes, I find that with headstrong female characters, the author can try too hard to beat this character trait over your head. “Watch her defy people! She’s her own woman!” It’s exhausting. Bridget gives in at times, but never when it’s truly important.   The supporting cast of characters are good too. You don’t see many in detail, but ones like little Mehmed add depth to the narrative. There’s even a dog, and y’all know how much I love dogs. One of my favourite things was that, early in the novel, Val saves little Pip (the dog) from being beaten by some street urchins. He does so not because he’s overly fond of dogs, but because he knows that his housekeeper wouldn’t like it. It made my heart melt. Bridget’s too, if I remember correctly.   There’s a good deal of conflict in this novel, too. A man as disliked as Val gathers more than a few enemies, and they crop up from time to time, presenting the reader with little mini-mysteries and suspense. Bridget, too, has her secret—one that she’s afraid of Val finding out. I might normally find so many bits of intrigue to be a bit tedious, but I found they were all developed well and resolved without too much unnecessary suspense.

The sex scenes are top notch. They’re hot but also, at times, artful. The first one has such a delightful buildup that the author could have completely forgone them for the rest of the novel and I might have never noticed. To be honest, a lot could have happened while I was reading this book and I wouldn’t have noticed. I have an asshole cat that likes to bite feet, and I think he could have gnawed my toes completely off without me bothering to look.

And the best part? There’s a happy ending. I know, I know—you wouldn’t expect much else in a romance novel. But it’s just so damn satisfying and tidy! And even though I’m upset about being finished reading this book, the author has so kindly written tons more for me vacuum up with my eyes. This books gets 5/5 stars and my undying love.