Stacked Up (Worth the Fight #6) by Sidney Halston 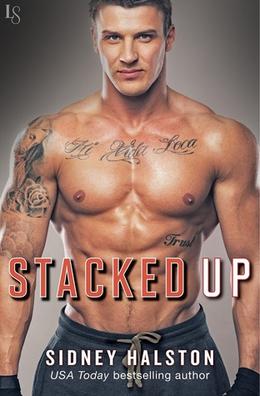 I can’t with this one, y’all. I just can’t. I know from poking around the internet that there are loads of fans of this series and if you count yourself among them, look away now. In my explorations of the reviews of this book, it appears that many folks think this one is grand for a while, but that the ending lets down the whole plot. Thus, if you’re looking forward to this one and have been waiting for it, it seems you’re probably going to love most of it!

Sponsored links
Before I get into a review like this, in which I am going to emphatically proclaim that this book is not for me, I like to remind readers that I know they might love it. I know that art is subjective and that books like these peddle in fantasy. A reader’s enjoyment of the book is probably going to be predicated on whether or not they find the book to be within the acceptable bounds of “fantasy”. I personally like my romance novels to be realistic fantasy. I like to feel like these characters are real people who live and breathe out there in the universe and with whom I may even be friends if we met in real life. I suspend my reality for things like the meet cute, the immediate mind-blowing orgasms of most books, and some other standard romance novel fare. Beyond that, and my enjoyment of a novel is going to be iffy.

In saying that, the first strike for me against this book is that good lord alive, none of the characters feel real. Not a single one resonated with me as an actual human being who would function in the world today. The heroine was two-dimensional and read like a caricature of a sheltered, homeschool girl rather than one who may actually exist. I know girls who were homeschooled and sheltered, in various states and for various reasons. None of them were naive to the point of putting themselves in danger as consistently as Penny is and does. I nearly threw my book about four times in the first twenty pages. I could feel the author’s judgement for Penny’s parents dripping off the page so heavily that it turned them into monsters of nursery tale variety. Are there people who make religiously-motivated decisions that harm their children? Absolutely. With routine frequency. I’m not ever denying that, but these parents weren’t human beings, they were tropes.

So Penny moves to Florida because she answered an internet advertisement for a bartender position and she needs a place to raise her baby daughter away from the judgement of her family. Worse decisions have been made for worse reasons. However, Penny is painfullynaive about money and life. At the start of the book, I’d buy that. Sounds like the girl’s parents weren’t super into the idea of preparing her for adulthood. But between the prologue and the first chapter, an entire year passses during which Penny does not grow or mature.

So skeptical reader is skeptical, and then we start to really get to know our hero. The good news for Penny is that she’s not ever going to have to grow or mature or stand on her own two feet because here comes Travis to do that all for her! With his odd and antiquated moralism (he frequents strip clubs, but Pennys is not allowed to work in one for she is “too pure”), and his macho stomping around the plot, this guy is barely emotionally equipped to be friend, much less a partner. We learn that Travis is an MMA fighter and that the rest of his tribe has been featured in previous books. They’re all featured in some sort of TV show about the sport, as well as working to be full-time fighters. I know nothing about MMA so I cannot attest to the accuracy of the depictions of that world, but other reviews seem to think it’s good.

There’s a bit with a kidnapping that’s not a kidnapping at the end that wastes time before the author ties every single plot line from the entire series up in a neat bow. I’m sure it’s lovely for fans of the series to make sure all their favorites are going off into the sunset, but it was just kind of lost on me.

I hope anyone who finds joy in this series has fun with this book. I also, personally, hope that they enjoy the book despite the sexism and man-centric story, rather than because of it.