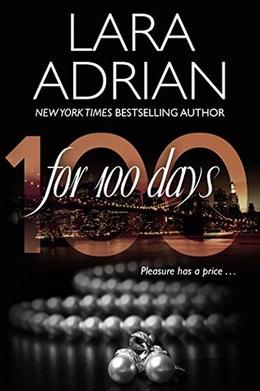 Readers, can we be real for a minute? This book is going to get a ton of (deserved) comparisons to Fifty Shades of Grey and is even getting some to Sylvia Day’s works. A few of the reviews I’ve seen popping up have claimed that 100 Days and its two planned sequels are everything that fans of Christian and Ana have been clamoring for, with a heavy implication that this series is the well-written version of that one. If that is what you’re looking for, if you were among the throngs of folks who enjoyed Fifty Shades, but sheepishly admitted it was horribly written and you know it, then get this series. If you loved the alpha dominance of that series but didn’t super love the pain aspect? Get this series and it’ll tick all the boxes.

Sponsored links
One of the challenge of reviewing romance (and this is the getting real part) is that so many of the tropes employed by authors don’t work for me, but I know they work for others. I want so very hard to be honest about a work and if it was or was not enjoyable for me, while remembering that Romanceland has many inhabitants and that variety is the name of the game. So I say what I said above; if you are a Christian Grey fan but wish he came with a little less bondage and a lot more orgasms, then get this series. If you dig NA heroines, but prefer them on the upper age bracket and a slight bit more self-aware than others, grab 100 Days immediately. Honest. I think you’ll adore it.

I say that because it even captured me while I was reading it, as the frustration bells were sounding in my head. It’s compulsively readable and enthralling, as it wraps its fantasyland of a New York where trusting strangers is a safe choice around your brain.

The plot is thus: Avery is a broke, starving artist who may or may not have what it takes to actually be successful. In the meantime, she’s working at a bar with her best friend and two awful co-workers. One night, a gorgeous woman sits down at the bar, checking her phone and looking stressed. Seems that she’s being stood up by a pal who is going to housesit for her as she’s an international model jetting off to Paris for a few months, because sure. Based on the fact that the bar is upscale, and Avery seems responsible and nice, the model asks Avery to housesit.

Yup, this is that kind of book.

So Avery goes to the opulent apartment and runs into a handsome stranger. The sexual chemistry between the two of them is immediate and intense. She comes to find that he’s super, insanely, wealthy. He not only lives in the penthouse of the building she’s squatting in, Nick flat out owns it. Of course he does. Nick is famous in the world of this book and Avery is understandingly overwhelmed by his life.

But for me? I’ve read this book before. I’ve read it so many times. I’ve met Nick before; the alpha who doesn’t believe in vulnerability, always thinks he knows best, and his version of showing respect to his partner and mine are very different. I’ve met Avery before; the girl-almost-woman who is closed off and views that as maturity and self-sufficiency, but is far too easily subsumed into someone else’s world to make me feel comfortable with the choices she’s making. Even when I was enjoying their interactions, my concern kept peeking in.

I’m not sure if I’ll keep reading this series, but I may. I’m on the fence about if the discomfort is worth seeing how it all works out. I really enjoy Adrian’s writing style, so that certain tips it in the “read more” direction.