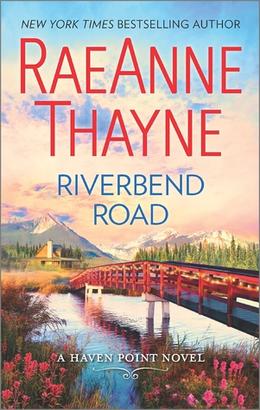 This was an interesting read for me. I loved the premise—lady cop in love with her sexy police chief boss who also happens to be her brother’s best friend. I mean, that’s just doubling down on crushable guys in a lady’s life. But much of it just fell flat.   Wyn Baily is an officer of the law. She’s possibly the world’s nicest person, but after saving two little boys from a barn fire, her boss—the hunky Cade Emmett—puts her on a week of unpaid leave for being reckless. This creates some tension between the two, which only adds to the tension of her having been in love with him basically all her adult life, and him liking her too and just not realizing it. That’s all gravy with me. I think that’s a great idea for a story, and there are even a couple little tidbits of mystery that keep the plot moving along.   The problem? It’s not enough. I’d like to start with the bad first and then leave it on a positive note, because reading this left me with a lot of respect for RaeAnne Thayne. First of all, I found it a little unbelievable. The characters had some depth, but they all seemed to lack the really gritty side that makes them human. Wyn is so good it’s bad, and the only time there’s a slightly bitchy character in the novel she ends up being a total sweetheart after a while.

Sponsored links
All of the working professionals in the town—Wyn, her boss, the doctor, the mayor, Wyn’s brother—are all apparently good looking men and women in their late twenties and early thirties. I know I’m supposed to suspend my disbelief, but it’s hard to do that when you’ve got that high improbability to deal with in combination with everything else.

The children in this really annoyed me. The kids Wyn rescues practically trip over themselves to save each other, and the kids of Wyn’s new mysterious next door neighbour actually introduce themselves and provide ages for them and their mum the first time they meet Wyn. I don’t know about you, but I didn’t even know how old my parents were until my dad had a big fortieth birthday party. That probably only stuck in my memory because there was lots of food there.

Wyn’s incredible selflessness, combined with the primarily hot and young townsfolk, and the fact that Haven Point is apparently the most beautiful place that’s ever existed (a quick walk from Wyn’s house will take you through no less than three meadows), make the whole thing a bit saccharine. It’s a sweet romance, emphasis on the sweet. Too sweet.

That being said, there were some really solid parts. I will take off my hat to Thayne as far as world building goes. I feel like she has a very detailed map of Haven Point somewhere. It can be a bit tedious how she’s always describing places and streets and street directions very specifically, but I know that there was a lot of work put into that so I can give her some props. It really does make for an immersive experience. Maybe Haven Point is too perfect to really exist, but with Thayne’s descriptive and intelligent writing, I really feel like I’ve been there.
And the writing is truly good. Thayne has a subtle humor that shows in her work, and she can articulate a scene incredibly well. Had this book not been so boring (and yes I would use a word as strong as that) I would have probably loved it. She’s an excellent writer, and I look forward to trying one of her books again in the future if possible. It wasn’t even that she lacked a true plot. The plot was good. It was the little bits between the plot points that really made it drag. As a Catch-22, many of those points were also what helped construct the world so well. Perhaps if I could have related more with the characters, if they had seemed more human to me, then I would have enjoyed it more.

All in all, though, it’s a solid book. Just because I didn’t enjoy it very much, doesn’t mean it won’t be heartily enjoyed by others. And, based on the other Goodreads reviews, I can tell that a lot of people really liked it. I give it ⅗ stars and the possibility of myself reading more in the series.