The Devil In Disguise (Bad Things #1) by Cynthia Eden 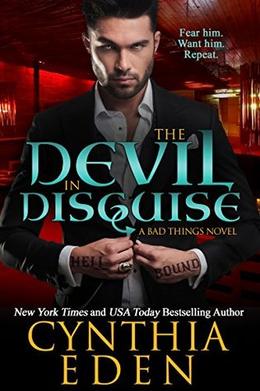 I was hooked into this book immediately. It was like when you see a video of someone walking along the street and stepping into an open manhole. One minute I was trundling along, the next I was plunging into darkness deep as hell (sorry Andrew Lloyd Webber) and I couldn’t have been happier about it. Check out this excerpt from the prologue and you’ll see what I mean:   “Once upon a time, twin boys were born...One was good…wings spread from his back. Angels bowed to him. And his brother… He had a really fucking good time as he did his very, very bad things.”   Now despite the fact that I don’t love seeing two verys next to each other, I have to say that quote made me confident that I was going to love this book. And, for the first little bit, I did love it. I went from “Oh, hell yeah!” to “Okay, still in it,” to “Ugh, no!” very, very quickly though.

Sponsored links
Woah! This review isn’t going the way you thought it would, is it? Well neither did this book.

The premise is solid. Really solid. Mina James is a siren, able to manipulate people just with her voice, and Luke Thorne is the ruler of all evil. It’s the typical boy meets girl, girl tries to steal something from boy, boy stops her from getting away, boy saves her from external threat kind of thing. As far as plots go, that’s definitely among my favorite types.

The problems with this book were the writing, characterization, and the execution. And those are no mere trifles. I believe that everyone has their own hierarchy when it comes to how important each of those components is for the enjoyment of the story. Luckily for this story, characterization is not very high on my list. Plot is around the top, but unfortunately so is execution. And if there’s a great plot premise that isn’t executed well, then my disappointment makes for an even worse experience.

It seemed sloppy, at best, the way the main events happened. The writing added to this fact. The author repeats things a lot, and is very tell-y. I don’t want you to tell me how strong Luke is, and how he’s more badass than all the other paranormal creatures. I want you to show me. Don’t tell me, repeatedly, that Luke controls all the other dark creatures—show me! Tell me once, maybe, if you absolutely have to. But for the love of Mary, don’t repeat it several times in one chapter. Don’t bring it up again chapters later. I get it.

As for the characterization, as I said it’s weak. While that might not matter to me as much as it matters that the plot is strong, it still definitely mattered. I liked Luke for the most part. He was interesting to read when he wasn’t talking about how he was the dark lord and like really strong or whatever, blah blah blah… I loved Julian and Rayce, his shifter body guards—though I occasionally got them mixed up. Still, they added a little fun to the story.

I hated Mina. There were parts when I thought for sure I’d like her. At times she acted like a boss ass bitch, going for what she wanted. But the rest of the time she was a snivelling little girl. One minute she was giving Luke the finger as she swam away from his private island, the next she was warning him about sharks and telling him to leave so he didn’t get hurt.

Not to mention the fact that she spends an inordinate amount of time weeping over the fact that everyone thinks she’s a slut because she’s a siren. Seriously? That is not a strong female figure that I identify with. That is not someone I would pair with Luke’s darkness. I get that she’s supposed to be the cream to his coffee, the yin to his yang, but I feel that could have been achieved without her being so damn whiney.

The villains were horrible. Garrick, especially, was the worst villain ever. He was creepy, sure, but he was one of those villains that feels compelled to spill all of his plan as soon as he has a captive audience. Come on. He wasn’t bone chilling. He wasn’t frightening. He was tedious.

I will say, however, that there was a bit of a delightful twist toward the end that kept me interested. And Luke, my favorite character, went through a little bit of growth that I found quite refreshing. Unfortunately, it was littered with the same over-explain-y bits that the rest of the novel was.

And, to top it all off, the sex scenes were just okay.