Once a Soldier (Rogues Redeemed #1) by Mary Jo Putney 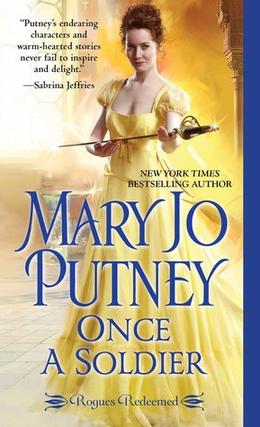 Guys, I wanted to like this one so much. The premise is so interesting, the time period often unexplored, the setting not England, and I was in the bag for this one. And then I just could not care about either the heroine or the hero. I didn’t connect even a little bit. However, since that connection between reader and characters is so subjective and so ethereal, I’m positive there are going to be a ton of folks who deeply enjoy this one.

Sponsored links
We meet Will Masterson as he’s about to die. He and several other English nationals are being held captive in the fight against the French and facing certain death. Will notices a crack in the wall in the nick of time, however, and they escape. They make a pact to help each other whenever possible in the future and go on their merry ways.

(Side note: Anyone who has read Putney’s Lost Lords series will know Will Masterson as one of the heroes who studied at Westerfeld Academy and who never got his happily ever after in that series.)

After Napoleon’s arrest and exile to Elba, Will is looking forward to his return to England. He’s a peer of the realm, after all, and is ready to take up that mantle of responsibility. Before he can set sail for Jolly Old England, however, he gets asked to escort men from the tiny nation of San Gabriel back to their (probably destroyed and most likely desolate) homeland. It seems like no one has heard from the tiny nation in a while and concerns are high that the French lay it bare.

So Will sets off, leading a group of exhausted and beleaguered men through the mountains to their homeland. When they get there, they’re all pleasantly surprised to find that while there has certainly been destruction and pain in San Gabriel, many people are alive and well. The infrastructure needs rebuilt, and the French were particularly unkind to the vineyards which provide much of the nation’s GDP, but all hope is not lost.

Even more surprising is that the nation is being held together by an Englishwoman named Athena.

Serving as advisor to the queen who is currently under the regency of a kind by elderly uncle, Athena has been largely responsible for any positive progress in San Gabriel since the French left. Will is immediately drawn to her and this book is as close to instalove as historical romances can really get.

They spend their courtship talking about bridges, how to rebuild San Gabriel, how to train the young queen, and then it takes a turn for the slightly suspenseful when they discover that it’s not just the French who sought the destruction of the small nation.

As a side bonus, there’s not just one happily ever after in this story, but two! The queen finds love with one of the men who come from abroad to help rebuild San Gabriel and their story is sweet.

As I said in the beginning, there’s nothing wrong with this book. I’m always game for opportunities to read non-English set historical romances and I was happy to spend time in vineyards instead of house parties in the Cotswolds. I liked reading about a heroine who had no practical need for a husband. I don’t want to get into details regarding that here, for the unfolding of Athena’s story and portrayal of self is something that is best experienced instead of explained.

I would recommend this for folks who enjoy slightly unconventional romances with intelligent heroines and heroes (Will borderlines on a beta hero here) with a dash of swashbuckling thrown in. There’s a lot to enjoy even without connecting with the main characters, I promise. Plus, if you do connect with them and enjoy it, please make sure to come back here and tell me about it.