Once Upon a Moonlit Night (Maiden Lane #10.5) by Elizabeth Hoyt 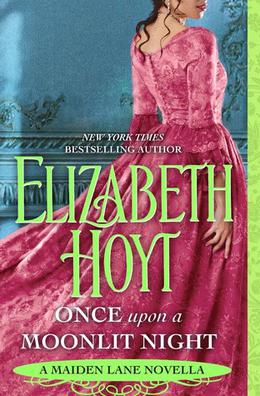 Once Upon a Moonlit Night exists in Elizabeth Hoyt’s Maiden Lane series as a novella between Duke of Sin and the forthcoming Duke of Pleasure. For those unfamiliar with the series, it doesn’t matter at all. All of them work as standalones and this novella is no exception.

Sponsored links
Hoyt’s writing is sensual and explicit and I often close the pages of her books feeling like “sumptuous” is the only word to describe what I just experienced. These stories and these characters wrap themselves around your brain as the vivid descriptions pop off the page. She is detailed about people’s bodies and how the other characters perceive them. She writes with great care about the rules of the world she’s in, the fashions, the perceptions, and of course, the sex. The bosoms are always heaving, but bosoms is far too delicate a word for these books.

In order for a novella to work for me, the two characters have to be sketched out quickly and succinctly. I have to know each character and believe their connection before I buy the sex in a romance novel (less so in erotica, clearly). In the space of about a hundred pages, I need to believe these two people would work enough to root for them to live happily ever after and that is no small order. After years of reading novellas, I have decided to only read ones from authors I trust. Thus, when Once Upon a Moonlit Night came across my review desk, I was pretty excited.

The story opens with Hippolyta Royle running through the woods to escape the Duke of Montgomery. She had been kidnapped by him four days prior, to force her into marriage. Hippolyta happens to be the wealthiest heiress in Britain who is not high born (her father is a self-made man), but she refuses to be sold like cattle to a lecher like Montgomery. Taking her leave, she desperately runs through the woods and runs smack into a carriage she desperately hopes will be her salvation.

After explaining who she is, the owner of the carriage, a Mr. Matthew Mortimer, promptly laughs hysterically and offers to escort the actress/prostitute/crazy lady to the next town. After all, whoever heard of an heiress covered in mud and running through the woods in the North of England in the middle of the night?

Especially not one so gorgeous as this stunning woman before him. We’re told pretty quickly that Hippolyta’s hair is raven and decadent, her skin is darker than normal, and her body is sumptuous. We learn later that all of that is due to her Indian mother.

Luckily for Mr. Mortimer, who also happens to be the new Earl of Paxton, and Hippolyta, they share a love of India and an affection for mongooses and pretty soon their overwhelming chemistry leads to a happily ever after.

I put the abduction tag on this because that’s how this starts and the Duke of Montgomery is a character who has to be dealt with in the space of the novel, but the abduction itself takes place off stage. The multicultural tag is much more relevant as the nature of Hippolyta’s heritage and the connections that Matthew feels to India are major plot points. This is the height of the East India Company and so I’m glad Hoyt is taking that into account.

Overall, if you’re looking for a sexy, historical romp for a quick read by the pool? One-click this now.