Devil and the Deep (Deep Six #2) by Julie Ann Walker 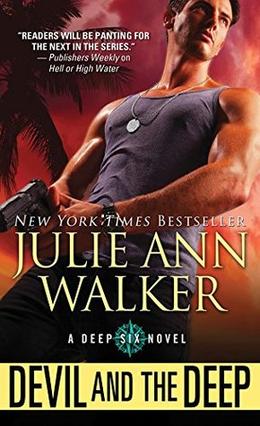 Devil and The Deep is the second full-length book in Julie Ann Walker’s “Deep Six” series. In the previous installments (which includes an introductory novella), we learn there’s a shipwrecked Spanish galleon somewhere in the Caribbean which contains treasure. The legends of the lost ship, La Santa Cristina, have taunted sailors for centuries. A group of former Navy SEALS have joined forces to find it. And, as is the law in these sorts of novels, find love along the way.

Sponsored links
This book concerns Maddy and Bran, who met previously when Bran rescued Maddy from kidnappers. They formed an immediate bond and when we pick up on their story in this book, it’s clear that they have some unfinished business. Since their original meeting, the two have become pen pals of sorts, exchanging emails regularly. We’re told that Bran looks forward to these emails, and some of his teammates rib him that a lot of his day is built waiting on the emails and responding to them. So when Maddy emails to say that she’s taking a group of scholarship students for a campout on an island not far from where he’s currently moored, you would think he’d jump at the chance to see her. However, some baggage from his past is weighing him down.

Maddy is the daughter of an insanely wealthy oilman and spends her days running the philanthropic arm of his organization. When the opportunity arises to both treat her most recent scholarship recipients to a special night away and be in proximity to Bran, she sees it as a win-win. While Maddy appears to be aware that Bran is holding back, she can’t figure out why. She’s pretty much in on this guy, hook, line, and sinker and cannot really sort out why he doesn’t fully reciprocate.

As it’s a suspense book, you can imagine that this campout does not really go as planned. Within a short time, bad dudes show up and disrupt the fun, abducting the girls and leaving Maddy to rely on her wits and her nearby SEAL friends to save the day. I’m not saying anything past that about the plot; I want to respect spoiler-phobes and let everyone enjoy the book as it is meant to be enjoyed.

This book was odd for me, to be honest. I spent a lot of it rolling my eyes at the Southern anachronisms that Maddy kept using (lawd, her metaphors overwhelmed the dialogue and I just couldn’t with her sometimes), I was frustrated that Bran just didn’t TALK TO THE LADY he was clearly into, and there was a secondary love story between Mason and Alex that took up a lot of air. However, I couldn’t stop reading. The scholarship girls were delightful, the plot moved speedily along, and the dialogue was flirty and fun (metaphors notwithstanding).

Also, Bran’s backstory is insanely important to the progress of their relationship and it just took too long to get to. If they had just met on page one of this book, I maybe would have bought waiting until Walker did to reveal it all, but we’re expected to believe they’ve been in heavy correspondence for a while. So anyone who finds themselves frustrated, know the answers are coming, they’re just not gonna come as quickly as you may like.

I think this probably works really, really well as a bridge book between the start of the series and its ultimate conclusion. I haven’t read the first few books, but the feeling I got was that Walker is an author who builds and builds and builds and by the time she reveals the full plot, her tapestry is intricate and perfect. Reviewing one strand and not the others feels empty somehow and I’m sure when we see the whole picture the threads that didn’t quite make sense will be revealed.

The charm of the characters is enough to let this be a standalone book, but I’d most likely recommend the whole series for folks who like SEAL suspense books with a little levity and a charming heroine who brings out the best in the hero.