Edge of Control (The Edge #3) by Megan Crane 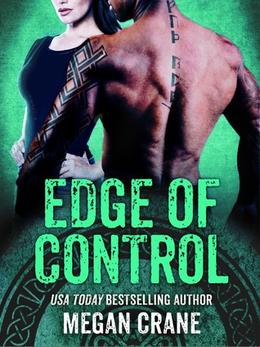 This is the third book in Megan Crane’s Edge series, and the second one that I’ve read. It’s set in the “drowned world” of a dystopian future, where the Church is all sorts of messed up, and people’s main task is to repopulate the world but not to enjoy it. The Edge novels centre on the Raiders, a kind of Viking-esque group of warriors that don’t bow to the traditional ways and basically have told the system to go fuck itself.

Sponsored links
Edge of Control is the story of Eiryn and Riordan. The previous heroines have both been much milder in temperament, but Eiryn is one of the few female members of the Brotherhood—the most badass of all the badass Raiders. That’s what makes this book slightly more interesting for me than the last one.

I still think the world is a bit dark for my tastes. It has its bits and pieces, and it’s interesting to read about in the way that it’s kind of interesting to read about ancient blood sacrifices and stuff like that. Not something I’d want to experience, but have a morbid fascination with nonetheless. My problem with that in this case is that you do experience it, because Crane is quite skilled at both worldbuilding and scene writing. That’s great except from when you don’t love the world you get dumped into. But hey, just cause I’m not fierce enough, doesn’t mean you won’t be!

As far as the characters go, I found Riordan to be a massive douche. I just didn’t think he was worthy of Eiryn. Crane has outdone herself with Eiryn. She’s a living, breathing person, as far as I’m concerned. She’s relatable but beautifully flawed. She’s got the kind of deep emotional hang ups that you would expect of a woman in her position but maybe wouldn’t consider just off the top of your head. I feel like Crane actually went and joined a futuristic militia for several years just to get in Eiryn’s head. It gave me feelings. I also loved that Eiryn thinks some of the aspects of the previous two couples’ relationships are just as weird as I do. It made me pause and take note of just how embedded Crane is in her stories, but not lost in them. Does that make sense?

The sex scenes, as seems par for the course with Crane, were steamier than a men’s soccer team locker room after winning a championship match. I did have a bit of an issue just because Riordan’s dickishness really came through in a lot of the earlier ones, and he was messing with my home girl Eiryn and I DID NOT appreciate that.

That being said, they got there in the end. It was fun watching them both become spies for a bit, and have to deal with being in each other’s company constantly. I don’t know if the romance would have happened if that hadn’t been the case, though it certainly would have been longed after by both of them, likely for the rest of their lives.

The writing, as I said, is quite detailed and immersive. My only issue with it is that it’s a bit long-winded at times. One conversation really drags on for like eight years. And there’s the problem of how dramatic the word choices make everything seem. People seemed to get punched in the gut a lot by their feelings. Also, dicks have a tendency to try to punch out of pants. Makes me picture a penis with a fist on the end, just throwing hits all over the damn place. I feel like there was a lot that could have been cut out. I understood that Eiryn was hung up on Riordan. I didn’t really need to be reminded every time he gave her a sidelong glance.

Edge of Control, and indeed the whole Edge series, is something I would recommend to anyone and everyone that loves dystopian romance. I haven’t read a lot of dystopian romance, mind you, but I wouldn’t hesitate to put Megan Crane right at the top of the pile. This would also be a great book for those who like tough-as-nails, boss ass bitch heroines who don’t take no shit but also have feelings ‘cause they’re human just like everyone else.

I’m going to give this book ⅘ stars. Excellent work, but just left a tiny smidgen to be desired.