Roman (The Brotherhood of Fallen Angels #3) by Heather Grothaus 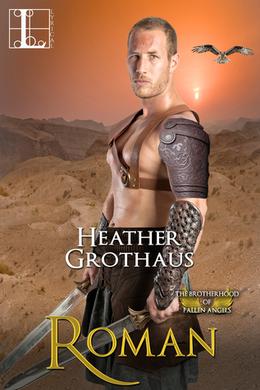 Straight up, this book is not a romance. I have no idea why it’s marketed as such, no idea why the author thinks it is one. There is no chemistry between the hero and heroine, and while they work really well as partners and strategists, I kept waiting for their happily ever after and it wasn’t there. If this book had been sold to me as a straight historical fiction, I probably would have enjoyed it more. But once you tell me it’s a romance? I want chemistry, I want commitment, I want something that indicates a relationship between the hero and heroine that goes beyond platonic.

Sponsored links
Additionally, I wouldn’t say this is a book that you can read without prior engagement with the series. This is the third book in Ms. Grothaus’s The Brotherhood of Fallen Angels series and this installment opens with a lot of un-introduced characters. We, as readers, are clearly supposed to know each of these people and each of their interconnected relationships and each of their plots and all of that. This is, admittedly, one of my greatest pet peeves in connected romance stories. If I have to know what’s happening, then give me a summary or clearly state somewhere that prior knowledge is required. If I don’t know the world you’ve built, then I can’t properly engage with it.

So, if you are into historical fiction, would like to read about wars and battles during the Crusades, I’d get this series. If you’re looking for historical romance, I’d recommend giving it a pass.

The premise of this one is straightforward. Roman Berg is a stonemason and architect who built the city of Chastellet. During its destruction, he is captured and nearly killed, but eventually rescued by a veiled woman. Two years later, that veiled woman, Isra Tak’Ahn, shows up at the hideout he and his friends have been using to hide from their enemies. Appears she has some enemies as well, since she shows up beaten within an inch of her life. Against the advice of some of his compatriots, Roman takes her in and agrees to accompany her on a journey back to Jerusalem.

This is all against the backdrop of the Crusades, with Saladin and his saracens lurking around each corner, so the political, historical intrigue is high. For anyone interested in reading this as a historical fiction piece, I don’t want to say anything else.

But again, as I said up top, this is not a romance. The blurb on the book claims it as one, using the phrase “nothing will defeat his love”. His love of what? Surely not Isra, as he appears to think of her as a colleague and not a lover. Personally, this is not a time period I enjoy reading about, but this blurb promised me passion and so I kept reading. And kept waiting. And kept reading. And kept waiting. When I closed the book, I was so frustrated. Had I known it as a platonic love, I would not have finished the book, and would not have been frustrated.